India   All India  25 May 2017  Kashmiri man tied to jeep as human shield files complaint against Major Gogoi
India, All India

The decision was hailed by many, while some political parties condemned the Indian Army's decision of commending Major Gogoi. 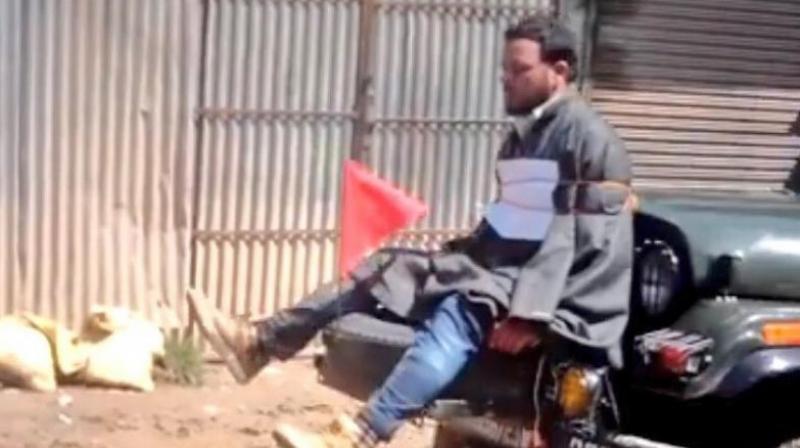 Major Leetul Gogoi tied Farooq Ahmed Dar to the bonnet of his jeep to prevent self from stone-pelting. (Photo: File)

New Delhi: Farooq Ahmed Dar, the civilian who was tied to the bonnet of a jeep by Major Leetul Gogoi, has filed a complaint in the state Human Rights Commission, Jammu and Kashmir against the latter's recommendation for a Commendation Card by the Indian Army.

Major Gogoi, who had tied up Dar as a shield to prevent a mob from attacking Election Commission staff in Jammu and Kashmir's Budgam, was awarded by Chief of Army Staff's (COAS) Commendation Card for his sustained distinguished service in counter-insurgency operations in Jammu and Kashmir.

The decision was hailed by many, while some of the political parties condemned the Indian Army's decision of commending Major Gogoi.

"I do not want to comment on the Army. But the Army personnel that were trapped would have been killed if not been rescued by Major Gogoi. We should never forget that he saved 19 people's life. And the Opposition who is raising questions, I would like to ask them to explain why they are silent over Lt. Ummer Fayaz incident. This is a kind of dual mindset. It is not right to keep silent over the martyrdom of patriotic people and killings of innocent people," Union Minister Ravi Shankar Prasad said.

Few political parties were left irked with the Indian Army's decision, citing that Major Gogoi's measures against stone-pelters would only aggravate the situation in the Valley.

"Army must not react this way. We should be sensitive towards the people of Jammu and Kashmir. This kind of action will further deteriorate the situation in the state," Communist Party of India (CPI) leader D Raja said.

The Congress party on the other hand cornered Prime Minister Narendra Modi and said, "The Army officials are also getting influenced by the working pattern of the Modi government. Modi government should not introduce the element of politics in the Indian Army."

The women wing of Jammu and Kashmir National Conference (NC) also carried out protests against this move.

Major Gogoi was in the spotlight after a video shot during the April 9 Srinagar Lok Sabha by-polls, posted on social media, showed Dar tied on the bonnet of an Army jeep.

Defending his action, Major Gogoi told the media, "I have not fired a bullet, not beaten up anyone... there was no collateral damage. From my point of view, I have not violated anything... We are here to help the people. The army is here for common people, against those with weapons and those who fight against nation."