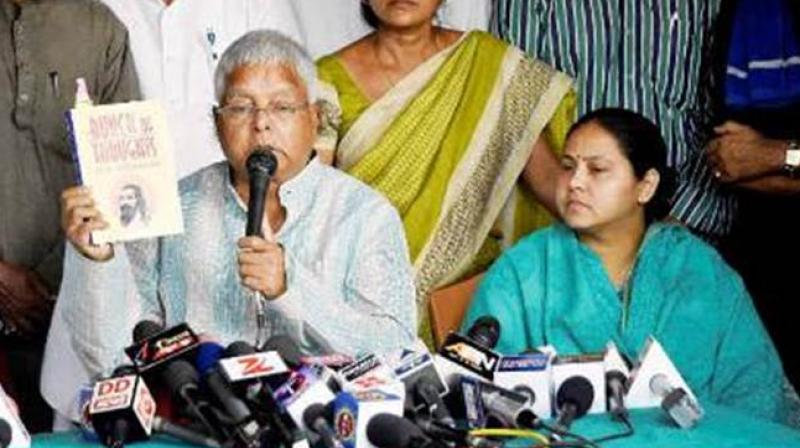 New Delhi/Patna: The income-tax department has asked RJD chief Lalu Prasad Yadav’s daughter Misa Bharti and her husband Shailesh Kumar to appear before it in the first week of June in connection with its probe in the alleged Rs 1,000-crore benami land deals and tax evasion cases.

The summons came over a week after income-tax officers conducted raids at over two dozen locations in Delhi, including New Friends Colony, Sainik Farms and a few farmhouses at Bijwasan and South Delhi areas, which allegedly belong to Lalu Yadav and his relatives through “benami” deals.

Sources in the I-T department said Ms Bharti and her husband will be interrogated on these deals and their statements recorded. Ms Bharti’s statement will be recorded on June 6 and her husband’s on June 7.

The I-T department could slap the newly-enacted Benami Transactions Act 1988 on the accused, which carries a maximum punishment of seven years in jail and a fine. Earlier this week, the ED arrested chartered acountant Rajesh Kumar Agrawal over allegations that he aided in illegal transactions involving Lalu Yadav’s relatives.

The couple are alleged to have links with a firm — M/s Mishail Packers and Printers Pvt Ltd — which is suspected to have entered into benami deals for the purchase of a farmhouse in Delhi’s Bijwasan area. There are some other benami deals also involving Lalu’s relatives which are being investigated by the tax authorities.

Meanwhile, RJD leaders on Wednesday accused the BJP of misusing the investigative agencies against the Opposition parties “who dare to raise the issue of their failures”.

Sharpening his attack on the BJP government, RJD spokesman Mriyunjay Tiwary told this newspaper that the “BJP’s tactics to demoralise Lalu Yadav, who has been trying to form an alliance against communal forces, has been exposed. The party is ready to fight a battle till the end”.

Last week, after I-T sleuths had conducted raids at several locations, Mr Lalu Yadav had said he was not scared and his “fight against fascist forces will continue”. He also said that “despite all efforts to destabilise my efforts, I have decided to hold a mega-rally to expose the BJP’s failures”. Mr Yadav plans to hold a mega-rally in Patna on August 27 against the BJP, in which “Congress president Sonia Gandhi and other leaders of similar ideologies will participate”, he had told reporters.

Bihar BJP leader Sushil Kumar Modi had earlier said Lalu Yadav’s family, including two minister sons and daughter Misa Bharti, had formed shell companies for dubious transactions and benami land deals. He had claimed that Misa Bharti and her associates had laundered money through a shell company to buy a farmhouse at Delhi’s Bijwasan area at a throwaway price. He also claimed Misa Bharti had converted her black money through the dubious transaction of sale and purchase of shares of her company Mishail Packers and Printers Pvt. Ltd.

Mr Modi also pointed out Misa Bharti had misused her father Lalu Yadav’s official bungalow in New Delhi as her company’s address. “Misusing official bungalow is also an offence as it cannot be used for any commercial purpose,” Mr Sushil Modi said.