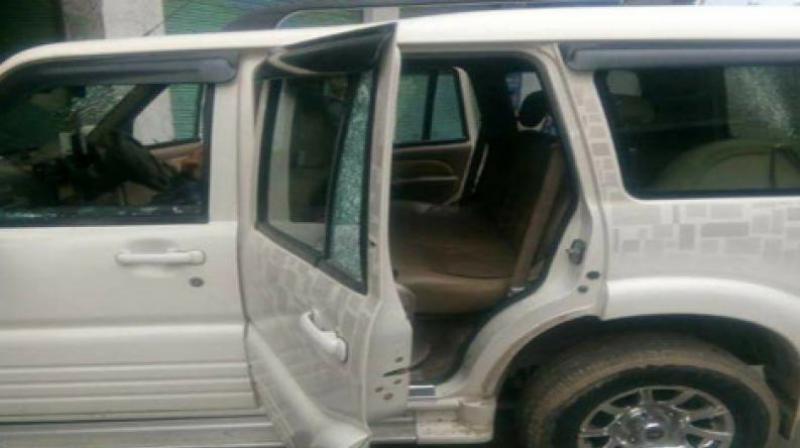 Srinagar: A mainstream political activist was killed by suspected militants in Jammu and Kashmir’s southern Pulwama district on Wednesday. Ironically, both Congress and J&K’s ruling Peoples’ Democratic Party (PDP) which he had remained associated with have ‘disowned’ him yet condemned his murder as deplorable.

The police said that gunmen believed to be “terrorists” shot Ghulam Nabi Patel at the main square of Rajpora, a Pulwama suburb. Two of his Personal Security Officers (PSOs) were also injured in the shootout.

Patel succumbed to his injuries on way to hospital, the police said and added that his PSOs Imtiyaz Ahmed Zargar and Bilal Ahmed Mir have been admitted to hospital.

Witnesses said that Patel, a resident of Pulwama’s Dangarpora, Shadimarg village, was travelling in  Scorpio SUV which was fired upon at Rajpora Chowk, leaving him and his two PSOs injured. They were removed to hospital but Patel succumbed to his injuries on way.

No militant outfit has, so far, admitted responsibility to killing the activist.

While Chief Minister, Mehbooba Mufti, while condemning Patel’s murder said that he was a “senior leader” of the Congress party, the latter termed him “a senior activist” of the ruling Peoples’ Democratic Party (PDP). Ms. Mufti who is also president of the PDP tweeted, “Heartfelt condolences to the family of senior Congress leader, G. N. Patel who was killed by militants today in Rajpora. Such cowardly acts achieve nothing but leave one more family devastated”.

A spokesman of the J&K PCC in a statement while condemning the incident said that the party expresses “profound grief and sorrow over the killing of senior PDP activist Ghulam Nabi Patel”. It added that killings in any form “are highly condemnable and must be condemned by every section of the people.”

The police sources said that a former state health department employee, Patel had joined Congress in 1991 and unsuccessfully contested both Lok Sabha and J&K Assembly elections more than once on party ticket and as independent. He later joined the PDP.