The police also used water canons and at one place fired rifles over the heads of stone-pelting mobs. 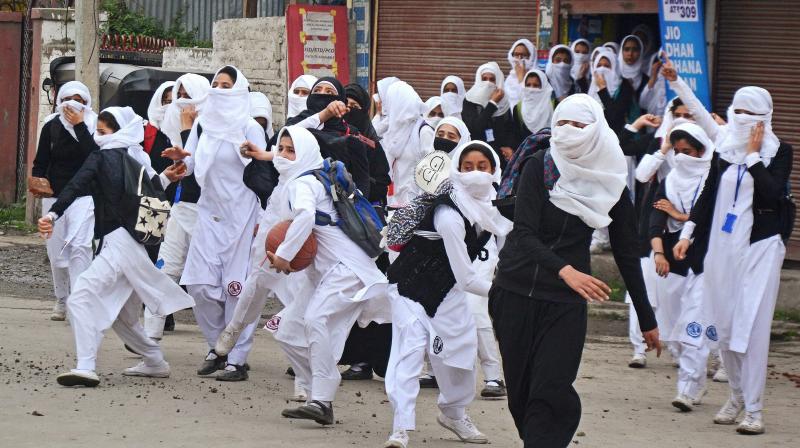 Girl students pelt stones at security personnel during clashes in the vicinity of Lal Chowk in Srinagar. (Photo: PTI)

Srinagar: Intense clashes between groups of students and the security forces erupted outside a Srinagar school on Monday morning and soon spread to the city’s commercial hub Lal Chowk and its neighbourhood.

The stone-pelting mobs were later joined by groups of youth from neighbouring localities and the security forces faced tough time in controlling the situation.

Soon the entire area was filled with acrid smell of tear and pepper gas as the policemen fired dozens of canisters to disperse the stone-throwing mobs of students. The police also used water canons and at one place fired rifles over the heads of stone-pelting mobs. A police spokesman, however, denied it resorted to aerial firing during the protests.

The clashes erupted after the police intercepted students when they came out of Sri Pratap Higher Secondary Institution along Moulana Azad Road, chanting slogans against the police and the government. The students said that they wanted to protest against the atrocities inflicted on them and their colleagues allegedly by the police during the recent student unrest in the Valley. The police and CRPF, however, did not allow them to take on the Moulana Azad Road and in order to push them back into the campus fired teargas canisters. The students reacted by hurling stones on the security personnel, triggering clashes.

The students of nearby government college for women also joined protesters and soon several Srinagar saw chaotic situation with traders bringing their shutters down and vehicles being withdrawn from the roads. At Nowshehra, a bus carrying students of a school home was also attacked when the crew resisted the protesters who want those on board to join them. The driver of the bus was slapped by a youth and two girl students on the bus received minor injured in stone-pelting.

A statement issued by the police in the evening said that the students were attending classes normally at Sri Pratap Higher Secondar School and in government college for women at Moulana Azad Road. “However, just after the end of about an hour of class work, some miscreants from different places entered in the school campus and created disturbances. They along with some students blocked Moulana Azad Road because of which hundreds of vehicles got  stranded on this ever busy road and adjacent chowks,” the statement said.

It added that the police and security forces personnel reached the spot but were pelted upon heavily due to which 12 personnel including three officers were injured. “The parents are requested to advise their wards not to indulge in stone pelting and other such activities which create    disorder in the schools and on the roads,” the police said.

The schools and colleges had earlier in the morning reopened for normal class work after remaining shut or witnessing disturbances for about one week. The authorities had ordered closure of the Valley’s educational institutions “as a precautionary measure” in view of protests inflamed by the alleged police atrocities on the students of a degree college in southern Pulwama town on April 15. While over fifty students including females had been injured in Pulwama, about 150 more students and over a couple of dozen security personnel were injured in subsequent incidents elsewhere in the Valley.

The protests continued even after Chief Minister, Mehbooba Mufti, appealed the people to help restore peace and normalcy in the Valley to ensure smooth academic, economic and tourism activities. She said, “Kashmir already witnessed tragic human, educational and economic loss and it can’t afford be pushed into perpetual disempowerment and darkness”.

However, as the ire over the Pulwama incidents continue to draw the ire, Kashmir University Students Union (KUSU), proscribed by the then government in 2009, called upon the student community to resume their classes after what it said a successful display of resistance, unity and valour. It was the KUSU which had earlier called for protests on April 17 against the Pulwama.

Meanwhile, groups of youth pelted stone on an Army convoy at Chadoora outside Srinagar on Monday following which the normal life was disrupted in the area. The Army was reportedly on way to Chrawani village of Chadoora for a cordon-and-search operation, the reports said.