With 4 more testing positive for the deadly virus, authorities decide to get tough with lockdown violators 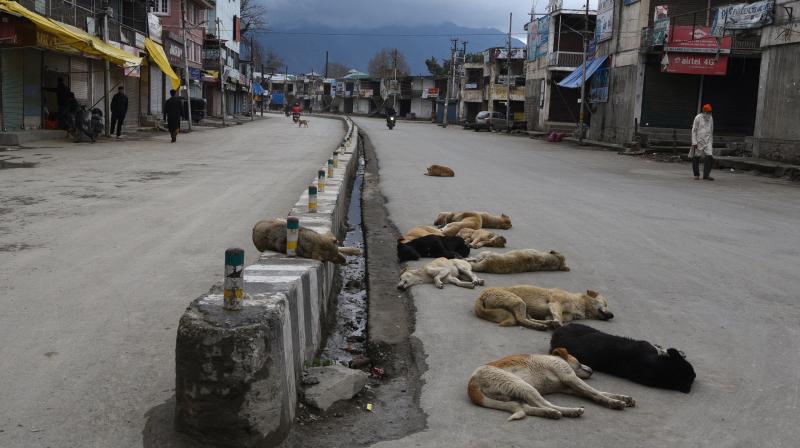 A preventive lockdown continued in Srinagar for the seventh straight day on Wednesday to arrest the spread of the coronavirus COVID-19 in Jammu & Kashmir. (Photo: H U Naqash)

Srinagar: The authorities in Jammu & Kashmir (J&K) have decided to enforce tougher restrictions across the Union Territory (UT) as the number of novel coronavirus, or COVID-19, patients swelled with four more persons testing positive on Wednesday.

Doctors said the new patients are residents of northwestern Bandipore district who contracted the deadly virus apparently after they came in contact with a local person who had returned to the Valley recently after attending a public outreach programme of the Tablighi Jamaat to spread the faith in various parts of the country. He is being treated at a hospital here.

As word of the four new positives spread, there were chaotic scenes in hospitals and other medical facilities in Baramulla and Bandipore districts with panic-stricken residents who had met this person rushing to get COVID-19 tests done.

With these four new confirmed cases, the number of corona positive patients in J&K has risen to 11  including eight in the Valley and three in Jammu. Thirteen people are being treated for the virus in Ladakh.

The J&K government on Wednesday said 5,124 travellers and persons who had had contact with suspected cases have been put under surveillance. So far, one of the 11 corona positive persons has recovered.

Since Thursday, police have arrested or registered cases against more than 300 people under relevant provisions of the law after they were found violating quarantine restrictions in force in the Valley since Thursday last in an attempt to limit the spread of COVID-19.

The police and district administrations have also sealed a couple dozen hotels and restaurants across the Valley after they were found functioning despite the closure order issued by the government under Section 144 CrPC and the Disaster Management Act, 2005. Official sources said that as many as 218 FIRs were registered against lockdown violators till Wednesday afternoon.

Police authorities said they will get tougher to ensure the lockdown is obeyed. “Anyone found violating restrictions would be taken to task. It is unfortunate that some people are not taking the situation seriously,” a senior police officer Vijay Kumar said.

The lockdown is being enforced strictly in Jammu too whereas tougher measures are in place in Ladakh. Lt Gov Girish Chandra Murmu has appealed to the people to obey the 21-day lockdown earnestly to break the chain of transmission.

A special control room set up in Srinagar to coordinate the measures initiated by the administration to cope with the situation has received complaints about more than 400 people who returned from abroad in past one week but did not report for mandatory screening or hid their travel histories from authorities. “These complaints have been received after the first positive case of the district surfaced on March 18,” an official spokesman said.