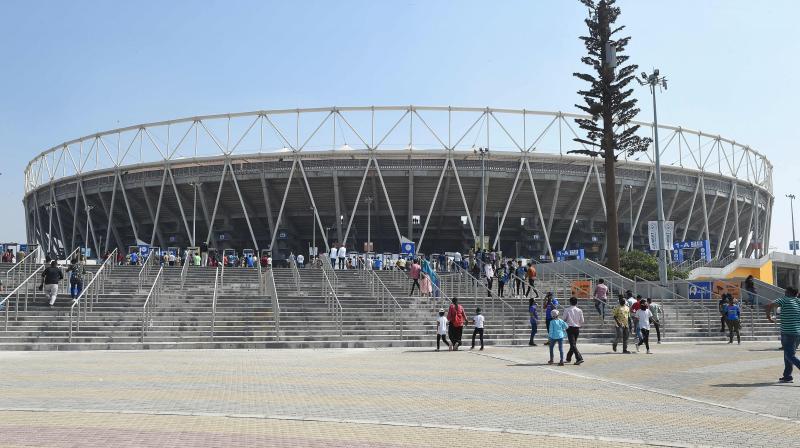 Soon after President Ram Nath Kovind inaugurated the world's largest cricket stadium in Ahmedabad, which will now be known as 'Narendra Modi stadium', social media was flooded with remarks, including by some leaders of the Congress and other opposition parties who alleged that the renaming exercise amounted to an "insult" to Sardar Patel. (AFP)

New Delhi: The renaming of the refurbished Sardar Patel cricket stadium in Ahmedabad after Prime Minister Narendra Modi triggered a political slugfest on Wednesday, with the opposition Congress saying it was an insult to India's first home minister and the ruling BJP flagging the naming of numerous stadia in the country after Nehru-Gandhi family members.

Amid the controversy, the government said the name change involves only the Motera stadium and the sports complex where it is located will continue to be named after Sardar Patel.

Soon after President Ram Nath Kovind inaugurated the world's largest cricket stadium in Ahmedabad, which will now be known as 'Narendra Modi stadium', social media was flooded with remarks, including by some leaders of the Congress and other opposition parties who alleged that the renaming exercise amounted to an "insult" to Sardar Patel.

Union ministers Prakash Javadekar and Ravi Shankar Prasad hit out at the Congress leaders, saying those who never respected Sardar Patel were objecting to the stadium being named after Modi.

Asked about the allegations, Javadekar told reporters that only the Motera stadium has been renamed and the complex where it is located continues to be named after Vallabhbhai Patel.

Prasad, who was present alongside Javadekar at the media briefing after a cabinet meeting, took a swipe at the Congress leaders, asking whether party chief Sonia Gandhi or Rahul Gandhi have so far praised the world's tallest statue of Sardar Patel erected at Kevadiya in Gujarat.

Javadekar said the two Congress leaders have not even visited the statue.

Prasad continued, "I want to say this with full responsibility that a tourist place getting global praise has not been visited yet or praised by the two Congress leaders. What else is there to say?"

The Congress said the renaming of the refurbished Sardar Patel cricket stadium in Ahmedabad after Prime Minister Modi is "an insult to every single Indian", and asserted that the BJP can never be a "game changer" but can only be a "name changer".

Taking a dig, Congress leader Rahul Gandhi again invoked his 'Hum do humare do' jibe, claiming that the truth was out with the stadium having the prime minister's name, two ends being named after corporate houses and Amit Shah's son being involved in cricket administration.

Congress leader Shashi Tharoor tweeted, "Maybe they just realised the stadium was named for a Home Minister who had banned their parent organisation! Or maybe this is advance booking to ensure the next visiting Head of State is hosted here, like Trump? Or is this the beginning of a legacy-creation-thru-labelling spree (sic)?"

Information and Broadcasting Minister Javadekar tweeted, "The name of the Sports Complex is Sardar Patel Sports Enclave. Only the name of the cricket stadium, within the complex, has been named after Narendra Modi. Ironically, 'The Family', which never respected Sardar Patel, even after his death, is now making hue and cry."

A similar post was tweeted by Kiren Rijiju, Minister of State (Independent Charge) for Youth Affairs and Sports.

BJP's national president J P Nadda said that naming the world's largest stadium after Prime Minister Modi is a "humble attempt to honour his vision" to take India to the top-most position in the sports arena as well.

The party's IT cell head Amit Malviya said that "the usual suspects" have a problem just because the cricket stadium, one of the many facilities in the Sardar Vallabhbhai Patel Sports Enclave, has been named after Modi.

"Get used to it! Today, several people speak of India and PM Modi in the same breath...," he tweeted.

Malviya hit back at Rahul Gandhi, saying he forgets that Adani End is the legacy of times when Congress politicians controlled Gujarat Cricket Association.

"Stands are allocated through an open auction and RaGa and his family are welcome to bid for it But this constant targeting of job creators is a problem!" Malviya said.

He also said probably Rahul Gandhi does not remember that 22 big stadia in the country are named after his father Rajiv Gandhi, grandmother Indira Gandhi and great grandfather Jawaharlal Nehru.