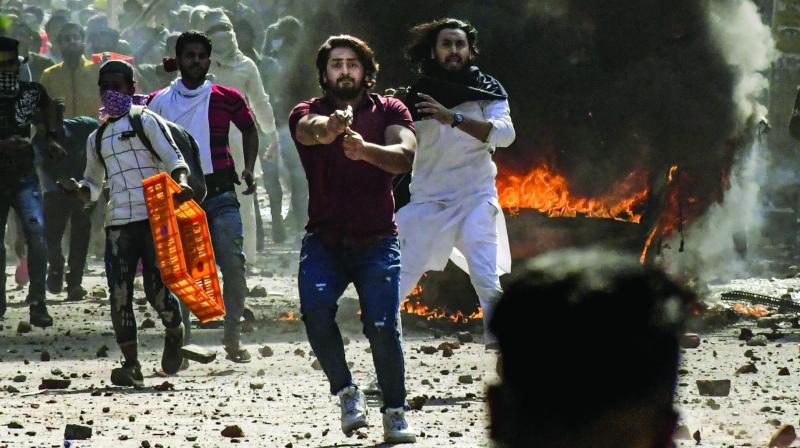 A protester brandishes a pistol during clashes between anti-CAA protestors and supporters of the new citizenship act at Jafrabad in northeast Delhi on Monday. In a video, the 33-year-old man, identified as Shahrukh, is seen running at an unarmed Delhi police officer in Jaffrabad brandishing a gun. He approaches the cop and then forces him to back away with his hands raised before firing eight rounds in the air. (Photo: PTI)

NEW DELHI: Four people, including three civilians and a police head constable, were killed and a deputy commissioner of police (DCP) was among 40 people injured on Monday in violence that broke out across northeast Delhi for the second time in less than 24 hours.

Protesters for and against the controversial Citizenship (Amendment) Act clashed with each, threw stones, set vehicles and shops ablaze and transformed parts of the national capital into a war zone, forcing the deployment of paramilitary forces and banning of large gatherings in affected areas. Eight companies of the CRPF, including two companies of Rapid Action Force (RAF) and one company of women security personnel, have been deployed in violence-hit areas of northeast Delhi, including Maujpur and Jaffrabad, amid reports of a petrol pump, two houses, seven shops, a dozen-odd vehicles and a fire tender being set on fire.

Union home minister Amit Shah called an urgent meeting of top officials of Delhi and said it will “monitor the situation”.

I urge everyone to exercise restraint for maintenance of peace and harmony.” Chief minister Arvind Kejriwal urged the Centre to restore law and order in the city. As Delhi is a Union territory, police and law and order fall under the Union home ministry.Satish Golcha, special commissioner of police (Crime), Delhi, said, “We are trying to maintain law & order. Our officers
are holding foot marches and appealing the protesters to disperse peacefully”. In the evening Union home secretary Ajay Bhalla said the situation was “under control” but the death toll kept mounting and violence continued to be reported from neighbourhoods in the area. Delhi Police Commissioner Amulya Patnaik was closely monitoring the situation from control room.

The clashes took place hours before US President Donald Trump arrived in the city, and seemed to be a fallout of Sunday’s violence that broke out after local BJP leader Kapil Mishra, who has a history of making communal and incendiary comments, held a pro-CAA rally in Maujpur, near Jaffrabad where a protest has been on since Saturday night against the citizenship law.

During the rally he gave an “ultimatum” to Delhi police to clear the roads in the area or else, he said, they would have to hit the streets.

“Three days’ ultimatum for Delhi Police - clear the roads in Jaffrabad and Chand Bagh. After this, don’t make us understand. We won’t listen to you. Three days,” he had tweeted in Hindi, along with a video of him speaking. “We will be peaceful till (Donald) Trump leaves. After that, we won’t listen to even you if the roads are not cleared,” he says. “We will have to hit the streets,” he adds.

As pro and anti-CAA protesters clashed on Monday, several disturbing videos of violence emerged throughout the day, including one late in the evening that showed a massive fire consuming the tire market in Gokulpuri. Six fire engines were rushed to the spot to control the blaze.

In a video a 33-year-old man, identified as Shahrukh, a local resident, is seen running at an unarmed Delhi Police officer in Jaffrabad brandishing a gun. In a chilling scene, he approaches the cop and intimidates him, forcing him to back away with his hands raised before firing eight rounds repeatedly into the air.

In other videos of the violence, which rapidly spread to the Bhajanpura,  Maujpur and Jaffrabad areas, among others, vehicles, shops and buildings were also set ablaze. A petrol pump was set on fire in Bhajanpura as petrol bombs were thrown by anti-CAA protesters.

Other videos show people from both groups breaking off chunks from the concrete divider along the road to throw at each other. In at least one of these videos shouts of “Jai Shri Ram” can be heard.

Police fired tear gas shells and resorted to lathicharge to disperse the violent crowd. Once the violence escalated, paramilitary forces were called in to restore peace. The police imposed section 144 of the CrPC, which prohibits assembly of four or more people, in 10 violence affected areas of northeast Delhi. The Delhi Metro also shut entry and exit gates of five stations — Jaffrabad, Maujpur-Babarpur, Gokulpuri, Johri Enclave and Shiv Vihar.

Delhi head constable Ratan Lal, 42, who died of head injuries sustained during clashes between two groups in Chand Bagh near Bhajanpura was a native of Sikar in Rajasthan. He joined Delhi Police as constable in 1998.

He was posted in the office of ACP, Gokalpuri. He is survived by his wife and three children.

The violence claimed the lives of three civilians who succumbed to injuries hours received during the clashes. One has been identified as Furqan Mohammad who is said to have died of head injuries.