The growth of the crops is managed by the Kosara team, which keeps you updated on the app. 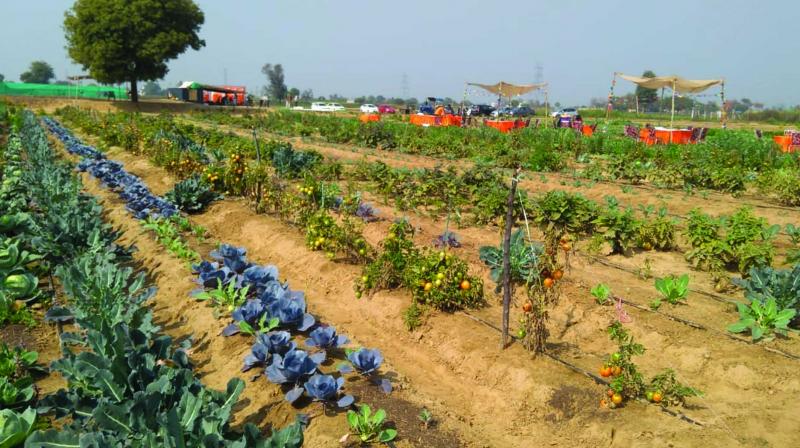 A picnic at a Kosara farm (Photo: Vijaya Pushkarna)

An app-based community farming project, Kosara, near Damdama Lake, Sohna Road, is enabling the urban middle class to get back to their roots in farming, soil their hands and take a call on the kind of organic vegetables they want on their tables. Seventy three families who have signed up on the community farming project have 700 sq ft of land allotted to each of them on which can be grown 12 seasonal vegetables of their choice.

Every week when the doorbell rings in their homes there is a great deal of anticipation and excitement. Waiting outside is a delivery boy carrying a basket of 5 to 7 kg of vegetables of their choice grown on their plot at the Kosara Farm. The cost of the doorstep-delivered weekly basket of organic vegetables is `3,000 a month.

The brain behind this return to your roots farming option is Paras Chopra, 27, an advocate who gave up the hurly burly of courtrooms to get back to nature and farming. While Paras has become a green hand very quickly, his partner, Saurabh Agarwal, continues practice as a corporate lawyer but dashes down for the healing touch of Kosara on holidays. Among their advisers are agronomists and seasoned farmers like Paras’ father, who has three decades of experience in farming. The two friends took on long term lease 55 acres of contiguous land from five families. For three years they allowed the land to rejuvenate, detoxing the soil and preparing it for organic crops. It was only in September last year that they started to get stakeholders or subscribers for the community farm. They spoke to Residents Welfare Associations, the Rotary Club, family and friends about having their own kitchen garden experience at Kosara as well as put out pamphlets in newspapers. Instead of the traditional marketing techniques, Paras and his team reached out to people on a personal basis. 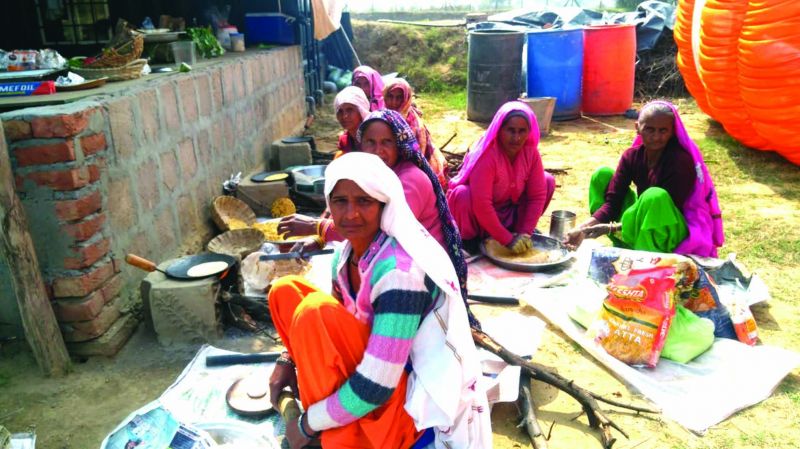 There are two kinds of farming options. The Click and Grow option where you subscribe to a 700 sq foot plot of arable land and choose from a list of seasonal vegetables on the app. The 17-member team at Kosara can harvest and deliver the produce once a week — enough vegetables to feed a family of four. Paras and his team prepare the land, plant the crop, manage the growth and notify members at every step on the app. In the second option called “do it yourself”, you subscribe to 1,400 sq feet of arable land and cultivate the seeds. The growth of the crops is managed by the Kosara team, which keeps you updated on the app. You can plan your visits according to the harvest cycle and take the produce home. Another option is to select from the list of seasonal vegetables and grow your produce organically with inputs from the Kosara team. Both farm models cost of `3000 a month and a three months commitment to the models are compulsory. Except for a handful of families, most have opted for the Click and Grow option.

So far there are 73 subscribers to the project from Manesar to New Friends Colony. With land available this number could go up to 1,500. Investments have been heavy but Paras is confident of good returns in course of time. “I am enjoying the fresh air, open fields and the winter sun,” he says. “But in the long run we are looking to take the Kosara community farming model, which in Sanskrit means “furrow” to other cities. Weekend brunches by subscribers have begun and in the days ahead, farm stays are to be worked out.”

Kosara has its own nursery for vegetables and a huge vermicomposting pit. To keep pests at bay and ensure healthy growth of crops they use garlic and neem oil, chillies and turmeric in addition to commercially available organic pesticides and fertilisers.

The 12 vegetable beds in each plot of 700 sq ft for as many crops are on raised land to ensure there is no flooding. Drip irrigation and solar energy ensure that there is no wastage of water or electricity. 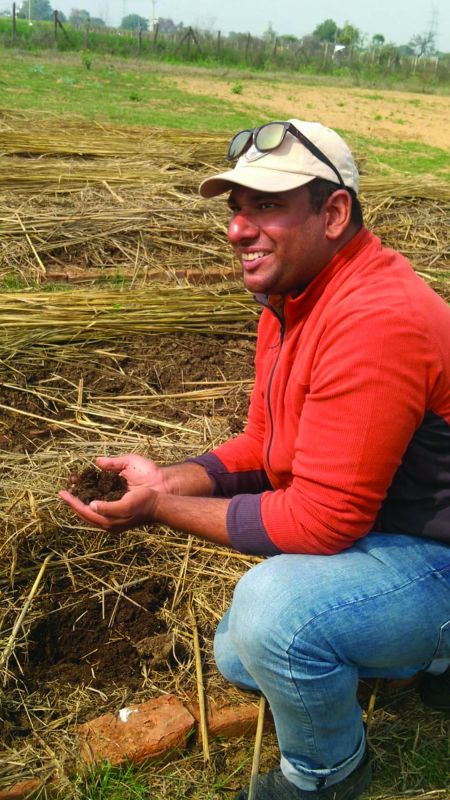 The health conscious subscriber can indulge in different kinds of lettuce leaves, spinach, peas, garlic leaves, coriander flower, zucchini, bakla (a kind of thick beans), broccoli, sweet potatoes, tomatoes — green, red and button-sized and everything else from potatoes to gourds. Giant size radish, salgam, can be seen bursting through the soil making children ask “why are they so big?” But farming has its challenges, says Paras. The capsicums were small and the coloured red and yellow variety did not take off. We are looking for new seeds and learning all the time, he says.

Sparrows and peacocks come to Kosara with their chirping and courtship rain dances. But the lush green fields of vegetables have been attracting wild boars as well as herds of neelgai (blue bulls) too. While the neelgai love zucchini, the wild boars are attracted by sweet potatoes or shakarkandi. One to two feet tall poles covered at the top with phenyl dipped cloth have been able to keep off the marauding neelgai, but keeping at bay the wild boars is proving more difficult. A multi pole alarm system with infra-red beams is being considered.

Expansion plans include growing wheat, millet, fruits and keeping cows for milk as well as gaumutra or urine used for making organic fertilisers. Since several subscribers have shown interest in desi eggs there is a move to introduce hens which are free ranging and can lay desi eggs.

Half the farming support is provided by landless women of 30 to 55 years. They are hard-working, come between 8 and 9 am and leave at 5 pm and get four days off in a month to look after their children and the cattle they own. For the women who come to out to make chapatis and chop salad when there are visitors, it has been a great learning experience too!