India   All India  25 Feb 2019  Delhi court refuses to stay interrogation of Vadra, asks him to join probe on Tuesday
India, All India

Delhi court refuses to stay interrogation of Vadra, asks him to join probe on Tuesday 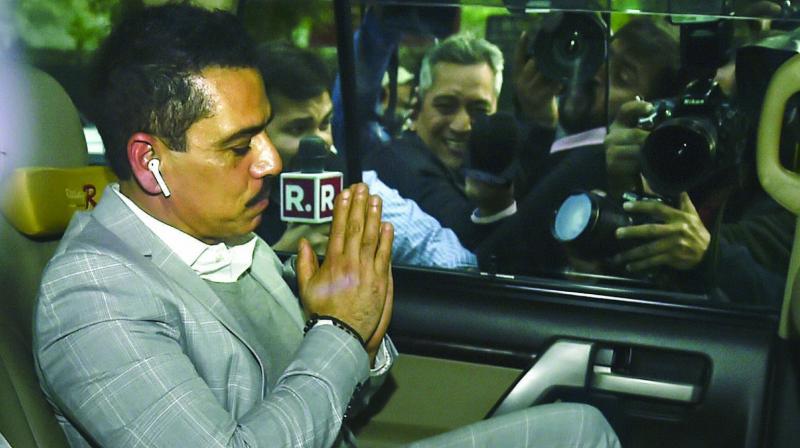 The court said Vadra will join investigation before the ED after it took up his plea for hearing. (File Photo)

New Delhi: A Delhi court Monday refused to stay interrogation of Robert Vadra, accused in a money laundering case, and directed him to join investigation before the Enforcement Directorate (ED) on Tuesday.

Special CBI Judge Arvind Kumar directed the agency to supply within five days hard copies of the documents seized from Vadra during raids conducted at his offices last year. The court has now posted for March 2 the hearing of Vadra's plea seeking directions to stay the ED interrogation.

Vadra, who is the brother-in-law of Congress President Rahul Gandhi, had said in the application moved by him on Saturday that the ED has been interrogating him based on seized documents and, therefore, their copies should be provided to him. On December 7 last year, the agency had carried out raids at Vadra's offices in Delhi.

The court said Vadra will join investigation before the ED after it took up his plea for hearing. During the hearing, senior advocate KTS Tulsi, appearing for Vadra, alleged that the agency wants to expedite the investigation as elections are approaching and they are losing their patience. Vadra is facing probe in cases relating to purchase of alleged illegal assets abroad and an alleged land scam in Bikaner, Rajasthan.

Vadra has appeared before the ED for questioning on multiple occasions in Delhi and Jaipur. The court had on February 16 extended the interim bail granted to Vadra till March 2. Vadra had filed an anticipatory bail application in the case linked to allegations of money laundering in the purchase of a London-based property at 12, Bryanston Square worth 1.9 million pounds. The property is allegedly owned by him.