Modi said that today’s changing lifestyle has brought its own set of challenges. 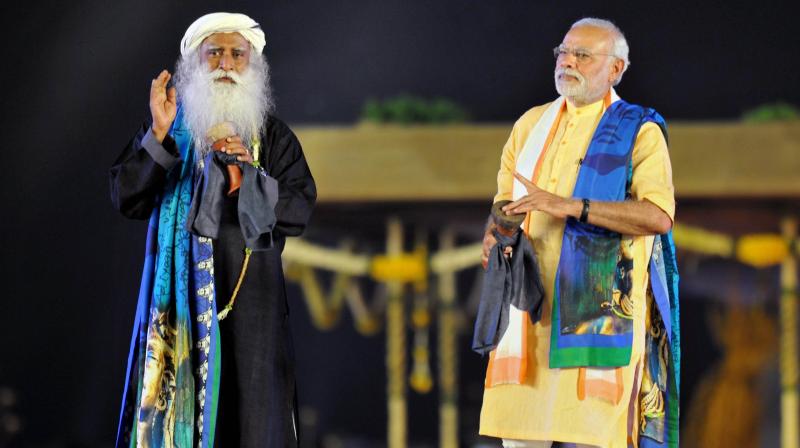 Prime Minister Narendra Modi with Sadhguru Jaggi Vasudev during the unveiling function of 112-feet iconic statue of Adiyogi Lord Shiva at Isha Foundation in Coimbatore on the occasion of Maha Shivratri. (Photo: PTI)

Coimbatore: Prime Minister Narendra Modi said here on Friday that the progress of humanity is incomplete without empowerment of women.

Speaking after unveiling the 112-foot face of “Adiyogi — the Source of Yoga” at Isha Yoga Centre on Mahasivarathiri, the Prime Minister said that humanity cannot progress without empowerment of women. “The issue is no longer women development, but it is women-led development,” he said. The Prime Minister said that yoga can give peace, which is longed by the world riddled with conflicts. “Today, the world longs for peace, not only from wars and conflicts but also from stress and diseases. Only yoga can create a spirit of oneness. If the body is a temple of the mind, yoga creates a beautiful temple,” he said.

Mr Modi said that today’s changing lifestyle has brought its own set of challenges. “Lifestyle related ailments and stress related diseases are becoming more and more common. Yoga is the passport of wellbeing as practicing yoga helps combat stress and chronic conditions,” he said.

Pointing out that woman is a manifestation of the divine, the Prime Minister said, “I am proud of the fact that the role of women is central in our culture. Our culture has so many goddesses who are worshipped. India is home to many women saints, who led the movement of social reforms. They shattered stereotypes to become trendsetters,” he said.

Mr Modi said that India is a land of unparalleled diversity, which has proved to be the nation’s greatest strength.  “Diversity is not a cause of conflict. We should accept it and embrace it wholeheartedly. Infact, compassion, kindness, brotherhood and harmony are virtues that have kept the Indian civilisation alive for centuries,” he said.

Stressing on the changing tenets of yoga, Mr Modi said, “Yoga is the catalytic agent aspiring for transformation. By practicing yoga, a spirit of oneness is created.”

Yoga is a beautiful journey from me to we,” he said.

The Prime Minister said that “Our mind should always be open to new thoughts and ideas from all side. Unfortunately there are a select few, who in order to hide their own ignorance, take a rigid view and destroy welcoming any new thoughts and experiences. In the same way, rejecting an idea just because it is ancient can be potentially harmful. It is essential to analyse it, understand and strive to take it to the new generation in a manner to make them understand it best,” he said.

The Prime Minister also lighted the sacred fire to commence the Maha Yoga Yagna, wherein one million people will take an oath to teach a simple form of yoga to atleast 100 people each in the coming year and thereby reach 100 million people before next Mahashivaratri.

The iconic face designed and consecrated by Sadhguru Jaggi Vasudev, Founder - Isha Foundation, symbolises liberation, representing the 112 ways in which every human can attain one’s ultimate potential through the science of yoga.

Lakhs of devotees including Chief Minister Edappadi K Palanisamy, Governor Vidyasagar Rao and a bevy of BJP leaders participated in the event.