A stunned US embassy in New Delhi also strongly condemned the shooting. 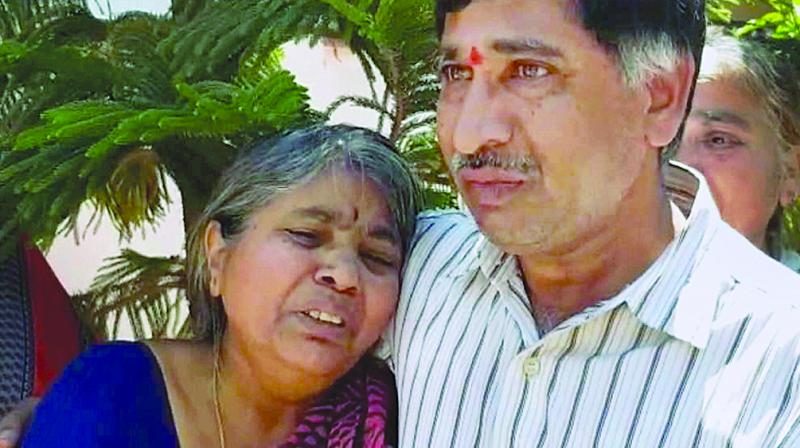 Parents of engineer Srinivas Kuchibhotla mourn his death in Hyderabad. Kuchibhotla was killed in a shooting at a bar in Kansas in the US. (Photo: PTI)

New Delhi/Hyderabad: Shocked at the “racially-motivated hate crime”, external affairs minister Sushma Swaraj assured all help and assistance to both families, saying that the Indian government would make “all arrangements to bring the mortal remains of Srinivas Kuchibhotla to Hyderabad.

A stunned US embassy in New Delhi also strongly condemned the shooting, saying the American authorities will thoroughly investigate and bring the case to justice, and significantly, emphasised that “the US is a nation of immigrants and welcomes people from across the world to visit, work, study, and live”.

The shooting has added to the fear in the Asian community in the US amid increasing anti-immigrant rhetoric there from various quarters following the Trump Administration assuming office last month.

Ms. Swaraj tweeted, “I am shocked at the shooting incident in Kansas in which Srinivas Kuchibhotla has been killed. My heartfelt condolences to the bereaved family. I have spoken to the family in Hyderabad.”

Meanwhile, a pall of gloom descended on the residence of Kuchibhotla at Bachupally in Hyderabad when his parents and family learnt about his death.

“Four years back he got married. He was highly appreciated by his managers at his workplace. We have been told the shooting is a hate crime. He was a very good person... We miss him,” an inconsolable Krishnamohan (his cousin) said.

Mrs Swaraj said she spoke to Indian Ambassador in US Navtej Sarna. “Alok Madasani who was injured in the incident has been discharged from the hospital. I have assured all help and assistance to the family,” the minister said.

“We understand that the alleged shooter is in custody and is expected to be prosecuted for the crime. US Federal authorities are also investigating the case. We have full faith that US legal authorities will bring the case to justice,” she said.

“The situation in the US appears pretty bad since Trump took over as President. I appeal to all parents in India not to send their children to the US in the present circumstances,” said Madasani Jaganmohan Reddy, father of injured Indian.

In a statement, US Chargé d’Affaires MaryKay Carlson said, “We are deeply saddened by this tragic and senseless act. Our deepest sympathies are with the victims and their families. US authorities will investigate thoroughly and prosecute the case, though we recognise that justice is small consolation to families in grief.”