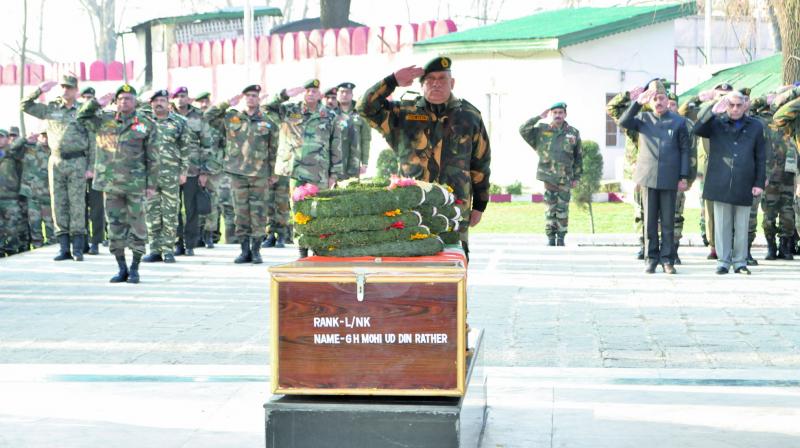 Srinagar: Army chief General Bipin Rawat on Friday called for coordinated efforts by security forces to deal with stone-pelting as he paid homage here to three jawans killed in a militant ambush in Jammu and Kashmir’s Shopian district on Thursday.

The Army commanders in the state their seniors in Sena Bhavan in Delhi are keen on revisiting the strategy on counter-insurgency operations in view of the rise in fatalities among its men while fighting militants.

The Army Chief held talks with top Army commanders at the Srinagar headquarters of its 15 Corps and visited Victor and Kilo Force headquarters outside the city and was briefed about the prevailing situation and the recent operations conducted by the security forces in the Valley.

“They made supreme sacrifice and the entire nation salutes them,” Gen. Rawat said after laying wreaths on the remains of the slain jawans at a ceremony held at the Badami Bagh Cantonment here.

“As the entire nation salutes the martyrs who made the supreme sacrifice in Thursday’s terrorist attack, the Army gave a befitting farewell to its bravehearts in the solemn ceremony,” the Army said in a statement.

Security experts and local analysts are of the view that the security forces should no more take militants active in the state as “amateurish” since they are now better trained and better equipped. Moreover, they are hardcore and extremely devoted to their “cause” compared to the preceding generation of militants.

Some Army officials are of the view that the standing instructions that maximum restraint should be exercised and other steps taken to avoid collateral damage during encounters are preventing the security forces from undertaking an “all-out offensive” against militants in populated areas.

As incidents of civilians relocating to encounter sites to help militants in escaping security dragnet during counter-insurgency operations have gone up recently, Gen. Rawat had earlier warned such people would be treated as anti-nationals and would face “harsh” action. However, some mainstream Opposition parties and separatists viewed this as an “open threat” to the people of J&K, although defence minister Manohar Parrikar defended the Army Chief, saying his statement was in national interest.

Defecnce spokesman  Colonel Rajesh Kalia said that  Gen. Rawat during his visit to the Valley reviewed the “collaborative measures” of security forces towards ensuring peace and calm in the region and interacted with local commanders and troops “urging them to continue discharging their duty with utmost professionalism”.

Lance Naik Ghulam Mohiuddin (a local Kashmiri), Sepoy Vikas Singh Gurjar and Sapper Sreejith MJ were killed in Thursday’s ambush. The Army Chief also condoled the death of an elederly woman, Taja Begum, who was hit by a stray bullet during the gunfight. Wreaths were also laid on behalf of chief minister Mehbooba Mufti and by  senior ministers.