India   All India  25 Jan 2022  Security alert along Pak border in J&K ahead of Republic Day
India, All India 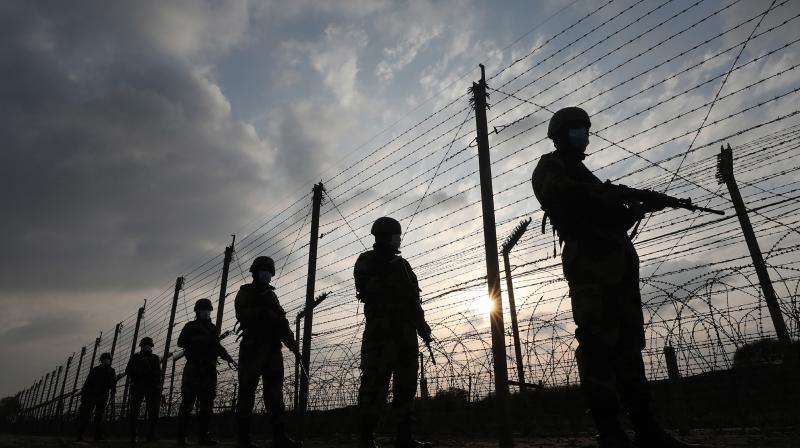 SRINAGAR: While security has been heightened further across Jammu and Kashmir and Ladakh ahead of Republic Day, the Border Security Force (BSF) said on Monday that its men are on high alert along the border with Pakistan in Jammu region to foil any “misadventure” by “anti-India forces and enemies of peace”.

The BSF is tasked to guard the 198-km stretch of the India-Pakistan border in Jammu region. Being part of the 2,912 km India-Pakistan border from Gujarat to J&K, it starts at Paharpur in Kathua district and ends at Chicken’s Neck corridor in Akhnoor sector where the Line of Control begins. In India, this 198-km stretch of the borderline is called International Border (IB) but is known as “Working Boundary” in Pakistan as it passes through a “disputed region”. In public parlance it is often referred to as ‘Sialkot-Jammu border’, however.

The BSF said that it has sounded a high alert along the IB in Jammu region on the eve of RD keeping in view the present security scenario and intelligence inputs. "BSF is carrying out extensive anti-tunnelling drive, special patrolling and depth area domination despite extremely hostile weather conditions," a statement issued by it in the winter capital said. It added that apart from strengthening the border domination the mobilisation of troops has taken place in the frontier.

The statement said that regular monitoring of “suspicious activities of counterpart”, an obvious reference to Pakistan Rangers, is being carried out through surveillance equipment. “A joint patrolling and exercise are also being conducted along with the Army, CRPF and (J&K) State Police to scuttle any nefarious attempts of anti-national elements," the statement said.

A BSF spokesman added that its men deployed along the IB in Jammu region have been “quite successful and consistent” in foiling attempts made from across the border to push in weapons and narcotic drugs by “eliminating intruders, seizing huge caches of arms and ammunition, narcotics and detecting tunnels in past one year”. He assured that the BJP Jammu range “has always been committed to border management with a humane face and relentless zeal and vigour."

In Srinagar, Inspector General of Police (Kashmir Range) Vijay Kumar said that all requisite security arrangements have been made to ensure peaceful conduct of RD celebrations in the Valley’s all ten districts.

“J&K police, the Army and the CRPF have been conducting security drills including area domination, drone surveillance in Srinagar and other district headquarters for the past one week. All sensitive areas have been covered and we will ensure a peaceful Republic Day in Srinagar and all other district headquarters,” he told reporters here on the side-lines of a full-dress rehearsal of the RD parade.

The main RD function and ceremonial parade in J&K is scheduled to be held in Jammu’s Maulana Azad Stadium at which Lieutenant Governor, Manor Sinha, will unfurl the Tricolour and take salute.