MEA secretary (East) Vijay Thakur Singh had also pointed out that India is “giving great importance to engaging with Brazil and its leaders”. 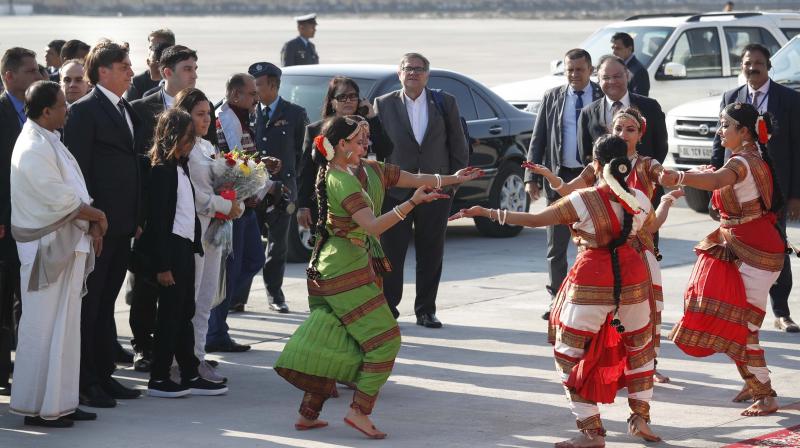 Brazilian President Jair Bolsonar watches a classical dance upon his arrival at the Air Force Station in New Delhi on Friday. (Photo: AP)

New Delhi: Brazilian President Jair Messias Bolsonaro reached India on Friday on a four-day visit during which he will hold talks with Prime Minister Narendra Modi on Saturday and be the chief guest at the Republic Day Parade this year on Sunday. He was received at the airport by minister of state for external affairs V. Mualeedharan. A total of 15 agreements are set to be inked between the two countries on Saturday. These will be in the spheres of investment cooperation, social security, mutual legal assistance in criminal matters, bio-energy, culture, cyber security, health and medicine, traditional systems of medicine, geology and mineral resources, oil and natural gas, scientific and technological cooperation, and animal husbandry and dairy production.

“Heartiest welcome to our Hon’ble guest HE Mr @jairbolsonaro, President of Brazil, on behalf of the Government and People of India,” Mr Muraleedharan tweeted.

“A special welcome to our Chief Guest for the 71st Republic Day. @MOS_MEA greeted the Brazilian President @jairbolsonaro on his State Visit to India. Both countries are closely working together to channelise commonalties into a solid foundation for future cooperation,” MEA spokesperson Raveesh Kumar tweeted.

In a significant move, India had on Thursday praised the Brazilian President and had described him as “an elected leader from a democratic country” who is “committed” to strengthening the strategic ties between the two nations.

At a special briefing on Thursday, MEA secretary (East) Vijay Thakur Singh had also pointed out that India is “giving great importance to engaging with Brazil and its leaders”.

She had also said that during the visit, India and Brazil would discuss the menace of terrorism as well as other issues of both regional and global importance.

She had also added that both countries have been in discussions over their common quest to become permanent members of the UNSC.

In a statement issued earlier this week, the MEA had said, “President of Brazil Jair Messias Bolsonaro will be paying a state visit to India from January 24-27 at the invitation of PM Narendra Modi.”

President Bolsonaro will be the chief guest at India’s 71st Republic Day Parade on January 26. He will be accompanied by seven ministers, chairman of brazil-india friendship group in the Brazilian Parliament, senior officials and a large business delegation.”