The CBI special court in Ranchi also imposed a Rs 10 lakh fine on both of them on two counts of Rs 5 lakhs each. 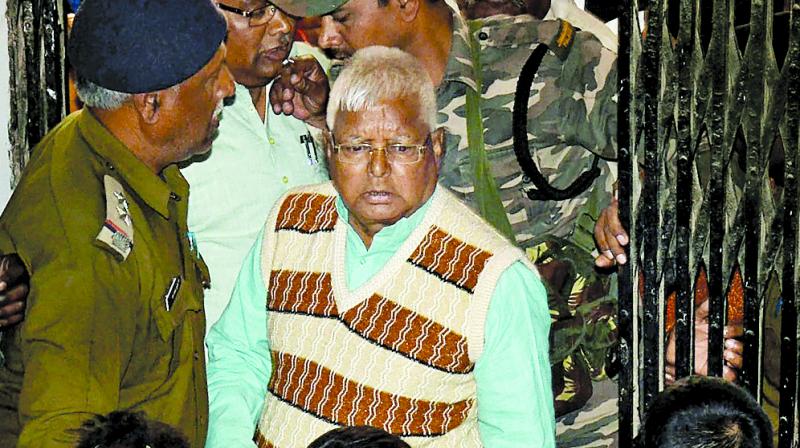 Patna/Ranchi: In fresh trouble for RJD supremo Lalu Prasad Yadav, CBI special judge S.S. Prasad on Wednesday convicted him in a third fodder scam case and sentenced him to five years in jail. He and another former Bihar chief minister, Jagannath Mishra, were held guilty for the fraudulent withdrawal of Rs 37.62 crores from the Chaibasa treasury in the early 1990s, when Lalu Yadav was Bihar CM.

The CBI special court in Ranchi also imposed a Rs 10 lakh fine on both of them on two counts of Rs 5 lakhs each. Former CM Mishra had earlier been acquitted in the Deoghar treasury case on December 23.

Lalu Yadav was present in court when the sentence was pronounced on Wednesday. With this order, he has been convicted in three cases relating to the Rs 900-crore fodder scam in the animal husbandry department of undivided Bihar when the RJD was in power.

“All political leaders including Lalu Yadav and Jagannath Mishra along with 48 others have been held guilty in the case related to fraudulent withdrawal from the Chaibasa treasury. Six persons in the case have been acquitted by the same court”, senior lawyer Ashok Kumar told reporters in Ranchi after the order on Wednesday.

Sources from Ranchi said the lawyers appearing on behalf of the CBI had sought maximum punishment in the case while Lalu Yadav’s counsel had urged for leniency before the special CBI judge in awarding the quantum of punishment, citing health-related issues.

Speaking on the issue in Patna, Lalu Yadav’s son Tejashwi Yadav said: “The CBI court has pronounced its judgment, which we respect. But this is not a final verdict against him. We have the option to move the high court, which we will do after studying the order.”

Lalu Yadav is facing a trial in three more fodder scam cases that are estimated to have caused a loss of over Rs 950 crores to the exchequer when he was Bihar chief minister. The verdict in two more cases related to the fraudulent withdrawals from the Dumka and Doranda treasuries is expected over the next few months.

Legal experts said the case which pertains to illegal withdrawal from the Chaibasa treasury is bigger than the Deoghar treasury case, in which he was sentenced to three and a half years in jail.

Lalu Yadav is now languishing at Birsa Munda Jail in Ranchi and has already moved the high court for bail in the Deoghar treasury case. A legal expert said: “He will have to file a separate bail petition in the high court in order to get released from jail.”

Lawyers said the CBI had made 76 persons accused in the Chaibasa treasury case, but 14 of them had died during the trial, and three accused turned approvers. Of 56 persons held guilty, six are political leaders and nine officials, including three former IAS officers.

In 2013, Lalu Yadav was held guilty in a similar case but after remaining in jail for 77 days was granted bail by the Supreme Court in December 2013.

That conviction resulted in his disqualification as a member of Parliament and made him ineligible to contest elections for a period of six years.