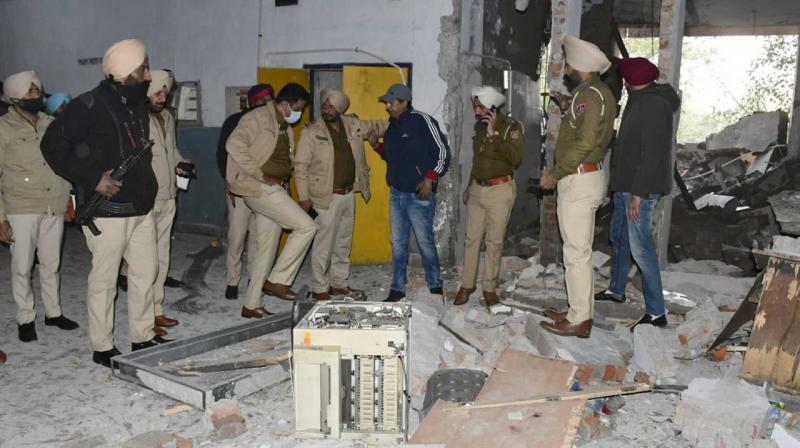 Police inspect the site of an explosion at the District Court complex, in Ludhiana. (Photo: PTI)

Ludhiana/Chandigarh: Punjab Chief Minister Charanjit Singh Channi on Thursday said as the Assembly polls are drawing near, some anti-national forces are trying to spread anarchy in the state.

He said this after a bomb blast in the Ludhiana district courts complex left one person dead and six injured.

Talking to reporters in Chandigarh soon after the incident, Channi termed the alleged sacrilege bids and the Ludhiana blast a "big conspiracy".

"As the elections are nearing, some anti-national and anti-state forces are trying to commit such disgusting acts and for this, the government is alert and people should also be alert," he said.

Channi said earlier sacrilege attempts were made but they did not succeed. Now, this blast has been carried out, the CM said.

Later in the day, Channi visited a hospital in Ludhiana and enquired about the health of those injured in the blast.

Talking to reporters in Ludhiana, he said prima facie, it appears that the person who died in the incident was operating the bomb. He said the body has not been removed from the site so that the crime scene is not tempered with.

He expressed fear that an attempt is being made to "spread anarchy" ahead of the state Assembly polls.

Channi later at a public meeting in Ludhiana's Mullanpura Dakha sought to draw a parallel between the registration of an FIR against Akali leader Bikram Singh Majithia, the blast and the recent alleged sacrilege bids.

He questioned as to why such a horrendous incident took place only after Majithia was cornered by the law.

Majithia (46) was on Monday booked under the Narcotic Drugs and Psychotropic Substances Act on the basis of a 2018 status report of a probe into the drug racket in the state.

Asked if it appears to be a suicide bomber and why would have this particular day been chosen, Channi said, "Sometimes, it appears we are doing political talk. Ever since we started acting against the drug menace, such incidents are surfacing."

Meanwhile, former Punjab chief minister Amarinder Singh condemned the blast and reiterated his concerns over the challenges to the state's peace and security.

Hoping that the Punjab Police and other security agencies will closely coordinate with each other in investigating the blast, he regretted the "diversionary" tactics by the Punjab government, particularly Chief Minister Charanjit Singh Channi.

"It is not only unfortunate but highly irresponsible on part of the chief minister to jump to conclusions by trying to construct a link between the blasts, the sacrilege incidents and the FIR against an Akali leader without any investigations," Amarinder said.

He said the CM must speak with facts and not with political rhetoric.

"There is a serious threat to the peace and security of Punjab and such incidents are an indication towards that which must be taken seriously and not brushed aside the way the government is trying to," he said.

"I condemn this cowardly act  Innocent people losing lives to vote bank politics and polarisation !! The politics of Hope and Unity must replace the politics of Fear and Division. Divisive force will be defeated by the indomitable spirit of Punjabiyat given to us by Great Gurus," Sidhu said in a tweet.

He further said the blast in Ludhiana "left no shadow of doubt that a series of peace-disrupting activities have been planned by vested interests to create law and order problem in Punjab".

He condoled the death and prayed for the speedy recovery of the injured.

He said Punjabis will never let the harmony and peace be disturbed in this border state.

Senior Congress leader Sunil Jakhar said people of Punjab needed to be assured of the state government's ability to maintain peace and law and order.

"People of Punjab can see through the evil designs behind today's bomb blast coming soon after attempts at desecrations. But they need to be assured of the commitment and ability of the govt to maintain peace & harmony. The CM can't afford to be seen floundering on this account," said Jakhar in a tweet.

He, however, alleged, "Police are being used to settle political vendetta. I want to say that the DGP has to maintain law and order, which they are not doing," said Badal.

SAD leader Daljit Singh Cheema condemned Channi's statement, in which he alleged that "sacrilege" bids and the Ludhiana blast occurred after the government registered a case against Majithia.

AAP leader and Delhi CM Arvind Kejriwal in a tweet said,"First sacrilege, now blast. Some people want to disturb the peace of Punjab. Three crore people of Punjab will not allow their plans to succeed."