This protest comes after more than a week after a crackdown between the Jamia students and the Delhi Police. 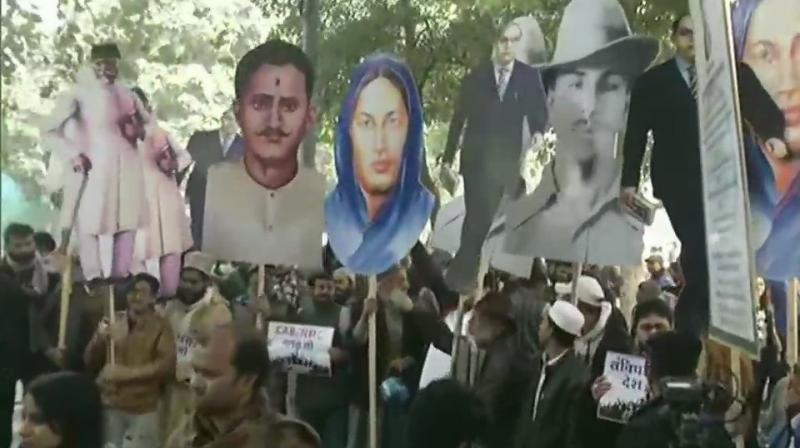 Last week, students across the world expressed concern over the use of police force during these protests. (Photo: ANI)

New Delhi: Section 144 has been imposed in central Delhi’s Mandi House area ahead of Tuesday’s protest planned by Jamia Millia Islamia Univeristy students against the new Citizenship Act and the National Register of Citizens.

This protest comes after more than a week after a crackdown between the Jamia students and the Delhi Police. The students had on Tuesday planned a huge march from Mandi House to Jantar Mantar, the designated area for protests in the national capital.  Security has been heightened in the area.

On December 15, the police crackdown on Jamia students after violence at a march organised by the students had led to protests across the country over the new citizenship law.

Students at the Aligarh Muslim University (AMU) clashed with the police the same night after their solidarity walk was stopped. In several cities, including Kolkata, Hyderabad, and Varanasi, students held midnight protests.

Last week, students across the world expressed concern over the use of police force during these protests. Over 400 students from different US universities, including Harvard, Yale, Columbia, Stanford and Tufts, issued a joint statement expressing solidarity with the protesters at Jamia and AMU.

The Citizenship (Amendment) Act - that cleared parliament earlier this month - makes religion the test of citizenship in India. The government says it will help minorities from three Muslim-dominated countries - Pakistan, Bangladesh and Afghanistan - to get citizenship if they fled to India because of religious persecution. Critics say it is designed to discriminate against Muslims and violates the secular principles of the constitution.