Financial inclusion of women is investment in human resources 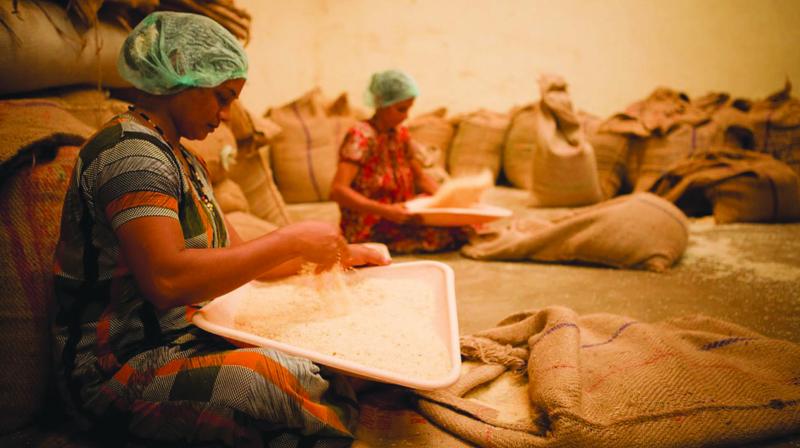 “Men and women should own the world as a
mutual possession.”
Pearl S. Buck

Gender inequality is not only a pressing moral and social issue but also a critical economic challenge. India has a larger relative economic value at stake from advancing gender equality than any of the 10 regions analysed in a McKinsey Global Institute report, The Power of Parity. The report says that if all countries were to match the momentum towards gender parity of the fastest-improving countries in their region, $12 trillion a year could be added to the global GDP. India could add $700 billion of additional GDP in 2025, boosting the annual GDP growth by 1.4 percentage points. The economic payoffs of gender parity are potentially enormous, especially for emerging economies.

Gender parity is also a moral imperative, recognized in the United Nations’ Sustainable Development Goals (SDGs). Together with the aggregate economic payoff, investing in women and girls can transform millions of lives for the better. Currently, the contribution of Indian women to the GDP (17 per cent), is not only far below the global average (37 per cent), but is also less than that of China (41 per cent) and sub-Saharan Africa (39 per cent). The deck is overwhelmingly stacked against them. Although India has narrowed the divide between men and women in primary education and the health sector, it doesn’t measure well in major metrics, including financial access, for measuring gender parity. India’s gender gap n has taken the shine off its strong economic performance in recent years

Indian women face worse prospects in almost every aspect of their daily lives — education, employment opportunities, health or financial inclusion. These broadly include: The type of work they obtain or are excluded from; The availability of support services such as childcare; their pay, benefits, and conditions of work; the insecurity of their jobs or enterprises; their access to vocational training; the availability of and access to appropriate financial services; the pricing of credit to cope with emergencies; specifically designed safety nets that are customised to their needs; and reliable insurance with flexible terms and affordable premiums.

India’s flagship financial inclusion programme has significantly changed the demographics. India is now at a tipping point, with sharply narrowing gender gaps in financial access. According to the World Bank’s Global Findex Survey (2017) 80 per cent of Indian adults now have a bank account — 27 points higher than the 53 per cent estimated in the Findex 2014 round. Findex 2017 estimates that 77 per cent of Indian women now own a bank account against the respective 43 per cent and 26 per cent in 2014 and 2011. On this basic measure of financial inclusion, females are more financially included than before. The male-female difference, or the gender gap, in account of ownership narrowed to 6.4 percentage points in 2017; it was 19.8 in 2014. Gender inequalities in access to formal credit have long manifested in India’s scarce gender-wise financial statistics. For example, distribution of outstanding credit in small borrower accounts shows 24.5 per cent share of female account owners against 72 per cent by men as onMarch 2017.

Experience worldwide shows that when a woman receives money, her entire extended family profits from it, as women make the best use of it, they are in fact one of the wisest investors .We create the most powerful catalyst for lasting social change. For all interventions, the fundamental logic is plain: If we are going to end extreme poverty, we need to start with girls and women.

The greater financial inclusion of women can go a long way in closing the gender gap. Financial inclusion of women enhances their self-confidence and places financial decision-making power in their hands resulting in large developmental payoffs. It is often cited as an essential tool in helping women in particular rise from poverty. The theory goes that when you empower women financially they’re able to secure their families’ welfare and create pathways toward education and improved quality of life for their children. Women’s participation in the financial system can have significant benefits in terms of economic growth, greater equality and societal well-being. Access and usage of financial services are levers for increasing women’s participation in the economy Women also need legal immunity from debts accrued by their husbands. Changing long-held beliefs, practices and laws may be difficult, but it is the only way to keep price tags off women and ensure them dignity and financial independence.

We do not necessarily need gender-specific policies, but rather policies that work for women. We need an enabling environment that incorporates women’s perspectives. We must understand that financially empowering women generates a multiplier effect in having a substantial impact on the well being of future generations. Thus, an enabling financial landscape with a blend of a favourable regulatory regime, innovative women-centric products/schemes, enhanced mobility, robust customer protection frameworks and reformed attitudes towards women will increasingly stimulate women’s foray into the workforce and yield success for the Indian economy.

“We already know a lot about how to make sure women have equal access to financial services that can change their lives,” Melinda Gates, co-chair of the Bill & Melinda Gates Foundation, said. “When the government deposits social welfare payments or other subsidies directly into women’s digital bank accounts, the impact is amazing. Women gain decision-making power in their homes,”

Finance is a powerful empowering tool and enterprising women have demonstrated the ability to reap dividends by investing in small businesses. With help for starting businesses, impoverished women can earn money and support their communities as well as their families. When accessible finance reaches women, the benefits are highly productive and sustainable. Savings rates are higher; repayment rates of family loans are remarkable; social cohesion is stronger and enterprise growth is stable. The experience of most microfinance programmes is that low-income women are highly dependable and trustworthy borrowers.

According to a Harvard Business Review study, women in emerging markets reinvest 90 per cent of every dollar earned into “human resources” — their families’ education, health and nutrition — compared to only 30 per cent to 40 per cent of every dollar earned by men. There are measurable improvements in child nutrition and education, family health and household sanitation, shelter and general welfare.

The president and CEO, Women’s World Banking, Mary Ellen Iskenderun has set the right tone for more women — enabling the financial inclusion agenda: “There is a strong connection between women’s access to financial products and services and greater opportunity not only for that woman herself, her family and her community, but really for the nation as a whole.”