India   All India  24 Dec 2017  Will punish those who disturb peace, says Rajnath Singh
India, All India

Will punish those who disturb peace, says Rajnath Singh

In another significant statement, the minister stressed on the important role of the people living near the international borders. 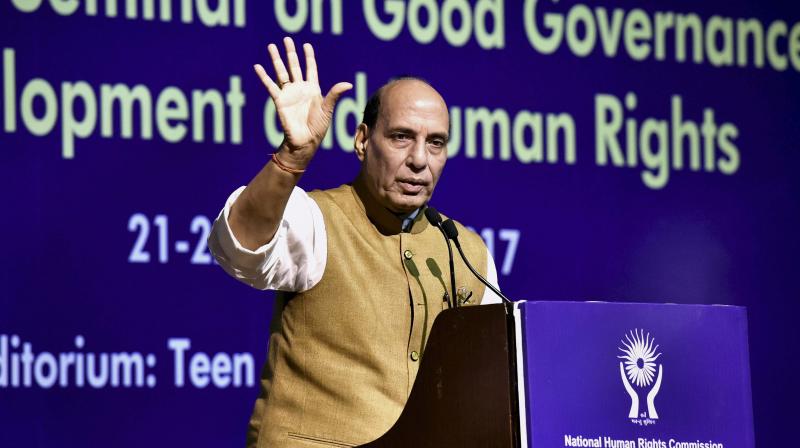 New Delhi: In a rare advisory before Christmas, the government has asked states to ensure maintenance of law and order in the backdrop of certain fringe elements recently threatening some Christian community members against celebrating the festival.

On December 17, a fringe group had issued a circular to the management of all city schools in Aligarh saying if they celebrated Christmas, it would be “at their own risk”.

Speaking on the sidelines of the 54th-anniversary parade of the Sashastra Seema Bal (SSB) on Saturday, Union home minister Rajnath Singh confirmed the issuance of the advisory.

“Any festival, whether it is Christmas, Ramzaan, Holi or Diwali, should be celebrated without any problems. Strict action would be taken if anyone tries to create ruckus during the festivals,” Mr Singh said.

“I believe that all people irrespective of any religion should celebrate each other’s festivals in its true spirit with full enthusiasm,” he added.

Lauding the role of the SSB for its counter-insurgency operations and anti-Naxal operations, Mr Singh said that the border force that guards the frontiers with Nepal and Bhutan has strengthened itself by creating more Border Outposts (BOP) after the Dokalam standoff with China.

“The past year has been tremendous for the force. The SSB has increased its strength after the Dokalam standoff with China, by creating more border outposts near Sikkim and Bhutan border,” Mr Singh said.

In another significant statement, the minister stressed on the important role of the people living near the international borders.

“People living near border areas should be considered as strategic assets of India”.

For decades a silent exodus has been taking place from the upper reaches of the Himalayan states bordering China.