Adding to issues like Gorkhaland agitation, communal flare-up or scams, CM Mamata Banerjee also took up cudgels against the BJP. 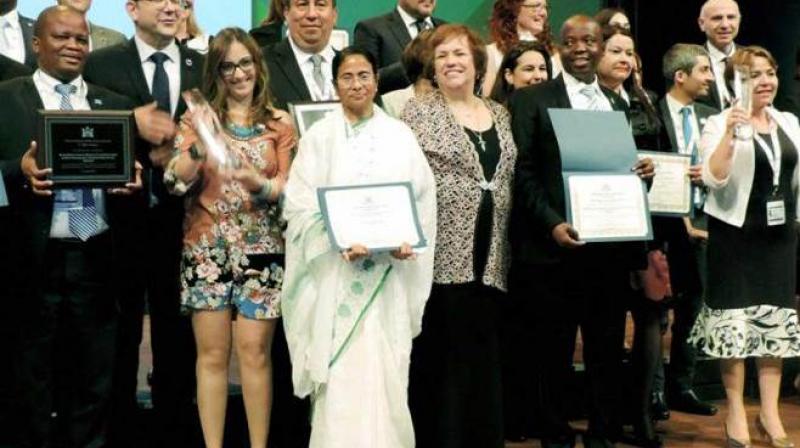 Kolkata: West Bengal was plagued by intense political rivalry, statehood agitation and communal riots in 2017 but the year ended on a sweet note as the state won the long battle with Odisha over the origin of the rosogolla.

Banerjee was in the forefront in opposing the demonetisation move and GST roll-out by the Narendra Modi government.

She termed GST as a "Great Selfish Tax".

The 104-day-long shutdown, the longest-ever bandh in Darjeeling in support of a separate Gorkhaland state, was marred by bloodbath and crippled tourism and tea gardens, the two main industries in the hills.

The agitation also saw the marginalisation of Gorkha Janmukti Morcha chief Bimal Gurung who was virtually eclipsed from the political scenario in Darjeeling and his one-time confidant Binay Tamang taking charge as the chairman of the board of administrators in the hills.

The communal riots in Basirhat in North 24 Parganas district was a blot in the state's social fabric.

The ruling Trinamool Congress termed it as the "handiwork of the BJP and the RSS", which denied the allegations.

The communal flare-up had triggered an unprecedented verbal duel between Banerjee and state Governor K N Tripathi with the latter accusing her of not doing enough to control the riots.

Two TMC MPs Sudip Bandopadhyay and Tapas Pal were arrested by the CBI in connection with Rose Valley scam.

A number of TMC leaders were interrogated by the CBI and the ED in connection with Narada scam.

Banerjee had dubbed it as the "vendetta politics" of the Centre and said that central agencies like the CBI, the ED and the I-T department were unleashed against her party leaders who were vocal against BJP's "anti-people policies".

The exit of Roy, once a close aide of Banerjee, from the TMC and his joining the BJP was another development in the state's political arena, where the saffron party is trying to make inroads.

Although the TMC maintained its winning spree in all the by-elections and municipal polls that took place in 2017, the BJP has emerged as the main challenger to the TMC in place of the CPI-M and the Congress.

The CPIM-led Left Front, which has been struggling to recover its lost ground, showed no signs of recovery as it tasted defeat in successive by-polls.

For the Congress, it was a herculean task to keep its public representatives together as many of the party MLAs and councillors had defected to the TMC.

In November, West Bengal tasted sweet victory, winning the bitter battle with neighbouring Odisha over the origins of the rosogolla.

Banerjee tweeted about the good news saying her state had been granted a GI or Geographical Indication status for the spongy balls.

Sweet news for us all. We are very happy and proud that #Bengal has been granted GI ( Geographical Indication) status for Rosogolla

Also on the positive side, the UN awarded 'Kanyashree' scheme by the West Bengal government aimed at promoting girls' education, with its highest Public Service Award. Banerjee had travelled to the Hague to receive it.