Gandhi took to Twitter in the morning to launch a fresh salvo before leaving for Gujarat on a stock-taking visit. 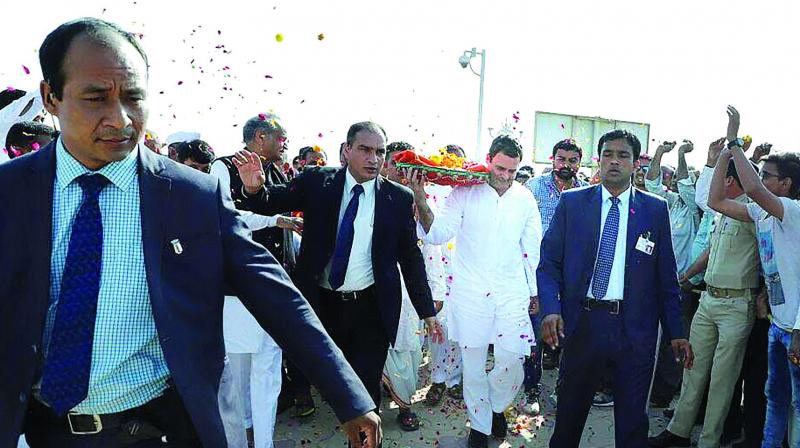 New Delhi: Congress president Rahul Gandhi is at it again. After putting the BJP in a tight corner with his barbs in the run-up to Gujarat polls and accusing the saffron party of having an “architecture and foundation based on lies”, Mr Gandhi on Saturday said that if ever the BJP has a film franchise, it would be called “Lie Hard”, drawing an analogy with the famous Hollywood film series, Die Hard.

Mr Gandhi also continued his efforts to claim the Hindutva space by offering prayers at the famous Somnath temple in Gujarat while on a post-poll visit to the state.

The BJP, which has over the past few months been forced to react to quite a few of Mr Gandhi’s attacks, accused the Congress chief of indulging in cheap barbs and lowering the political discourse in his bid to gain power.

On Saturday, Mr Gandhi took to Twitter in the morning to launch a fresh salvo before leaving for Gujarat on a stock-taking visit.

The self-confessed movie buff tweeted, “You all know the truth now about 2G, the truth is in front of you. If BJP had a film franchise it would be called Lie Hard.”

On Thursday, a special CBI court in Delhi had acquitted all the accused in the 2G spectrum scam, an alleged corruption scandal which is said to be one of the reasons for the defeat of the UPA-II, led by Prime Minister Manmohan Singh, in 2014.

On Friday, Mr Gandhi had said that the foundation of the ruling party was based on “lies” and Mr Modi’s “Gujarat model” was “flawed and fake”. He had alleged that whether it was Mr Modi’s poll promise of putting `15 lakh each in peoples’ bank accounts, the 2G spectrum case or Mr Modi’s development model, “one by one the lies are coming out”.

BJP national spokesperson G.V.L. Narasimha Rao hit back saying, “Rahul Gandhi, is this the low level of political discourse that you are capable of? To gain power by all means, would you indulge in such cheap barbs?”

Whatever Mr Gandhi might say, his party will not return to power as people know its corrupt face, Mr Rao added.

On Saturday, Mr Gandhi was back in Gujarat for stock taking after the Assembly poll results were announced on December 18. He began his day by offering prayers at the Somnath temple before heading out to meet party leaders. During his campaign in Gujarat, the Congress president had made it a point to visit 26 temples, inviting allegations of peddling soft Hindutva.

On Saturday, Mr Gandhi interacted with leaders from the four regions of Gujarat and reviewed the party’s performance in each sector.