2016: LG's powers in Delhi and many other HC ruling that went against Kejriwal

Arvind Kejriwal government had a hate-hate relationship with the Centre over governance. 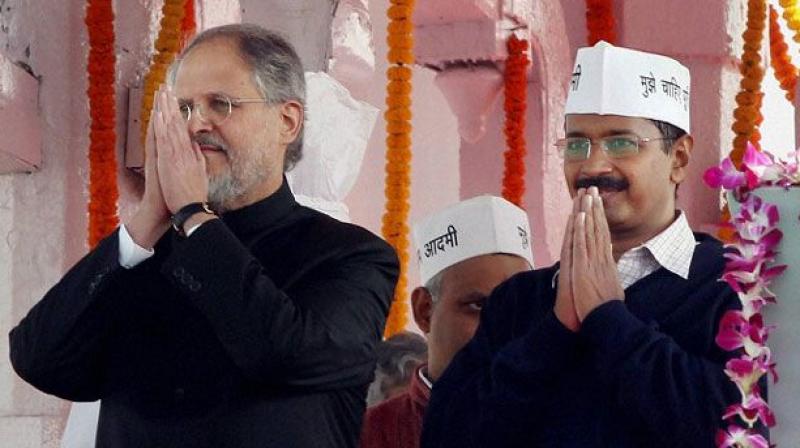 New Delhi: Lieutenant Governor is the "administrative head" of the national capital, the Delhi High Court ruled in 2016 besides pronouncing a series of judgements that came as setback to the Arvind Kejriwal government which had a hate-hate relationship with the Centre over governance.

The body blow given by the judgement denying its claim for full statehood for Delhi had its impact on other agendas of the AAP government which lost its fight in the high court over its right to appoint parliamentary secretaries without the consent of the LG.

While Kejriwal protested the landmark August 4 verdict, Lt Governor Najeeb Jung, who was at loggerheads with the AAP regime and has now resigned, did not miss the opportunity to order re-examination of all decisions of Delhi government, particularly those concerning shuffling of bureaucrats whose postings remained a bone of contention between it and the Centre.

The judgement proved to be a thorn for the Delhi government with the Supreme Court's refusal to stay it pushing the AAP regime to backfoot as it lost its voice in supporting many of its decisions like the right to appoint Anti- Corruption Branch chief.

However, it later came to the high court with a statement that many of its decisions like appointment of Commission of Inquiry to probe alleged scams in CNG fitness and the Delhi and District Cricket Association, besides selection of Delhi Electricity Regulatory Commission Chairman was done without the LG's nod, which was made clear by the August 4 judgement.

While ruling party cadres and its leaders were trying to come to terms with the loss in its fight for statehood, they suffered another jolt when the high court refused to stay criminal defamation proceedings against Kejriwal lodged by Finance Minister Arun Jaitley.

Jaitley also dragged in other AAP leaders – Raghav Chadha, Kumar Vishwas, Ashutosh, Sanjay Singh and Deepak Bajpai -- for their allegations against him in connection with the running of DDCA when he was heading it for over a decade.

The AAP leaders also faced civil defamation lawsuit filed by Jaitley who claimed a damage of total Rs 10 crore from them on the issue, with the senior BJP leader recently walking in to the high court to record his evidence.

DDCA too had its share of troubles as it faced charges of irregularities in its functioning from several quarters, including Kejriwal and now suspended BJP MP and former India batsman Kirti Azad who moved high court for a CBI probe of the association.

Though DDCA retaliated by filing civil defamation cases against Kejriwal and Azad, the cricket body had a tough time explaining away the findings of Justice (Retd) Mukul Mudgal - appointed by high court to oversee DDCA's functioning – who pointed out several financial irregularities and deficiencies in its working.

The DDCA also faced the high court's wrath for replacing selectors appointed by Justice Mudgal and not having proper clearances to hold matches at the Ferozshah Kotla stadium.

Besides cricket, wrestling was another sport that grabbed the headlines for wrong reasons as the high court for a pretty long time became the arena of legal battle as to who will represent India in the 74 kg freestyle at the Rio Olympics with Sushil Kumar, double Olympic medallist in 66 kg, challenging the nomination of Narsingh Pancham Yadav.

The verdict went in favour of Narsingh as Kumar had not participated in the trial for selection in that weight but the victor of the legal battle became the victim of alleged dope scandal and returned disqualified from Rio.

Amid all these developments, student politics of JNU, also engaged the high court which provided relief to student union leader Kanhaiya Kumar, who was arrested on sedition charges for taking part in an event in the campus where alleged anti-India slogans were raised.

The students were also subjected to disciplinary action by the university which was stayed by the high court that is now dealing with the mysterious disappearance of another student from the campus in which Delhi Police has been getting a dressing down for failing to trace for over a month 25-year -old Najeeb Ahmed whose mother has been running from pillar to post to recover her son.

The Centre too faced a setback when its move to ban 344 fixed dose combination (FDC) drugs was initially stayed by the high court which towards the fag end of the year set aside the decision saying it was taken in a "haphazard manner".

To address the alarming levels of air pollution, the court directed neighbouring states to cut down or stop stubble burning, even as it asked Delhi government and civic agencies here to ensure that ongoing constructions do not leave rubble lying around as it also generated particulate matter.

It also batted for use of CNG-run cabs in the city, as wasalso ordered by the Supreme Court in 1998-99 when it had directed that all public transport vehicles should run on this clean fuel.

This caused considerable difficulty for app-based cab services like Ola and Uber which had to undertake in court that taxis employed with them would switch over to CNG. These cab operators also had to answer in court regarding allegations of surge pricing against them.

The high court towards the end of the year said the app-based cabs have to comply with the rates fixed by Delhi government till the issue of their regulation is taken care of by a court-appointed expert panel.

Payal Abdullah, estranged wife of former Jammu and Kashmir Chief Minister Omar Abdullah, and their sons also got no relief from the high court which directed them to "forthwith" vacate the government accommodation as their claim to the 7 Akbar Road bungalow was "illegal".

Senior Congress leaders including Sonia Gandhi and Rahul Gandhi, accused in the National Herald case, had to approach the high court challenging trial court order summoning documents from Finance and Corporate Affairs Ministries and other agencies and the balance sheet of the Congress party. The high court set aside the trial court order.

Virbhadra, his wife and children came to the high court challenging the attachment proceedings against them in a money laundering case lodged by the Enforcement Directorate. The court, however, refused to stay the attachment proceedings against the chief minister, who had to fend off CBI claims of having disproportionate assets as the agency said it was ready with the charge sheet.

Sajjan Kumar too had a tough time as he faced flak from the high court for his plea for changing one of the judges of a division bench hearing appeals against his acquittal in a anti-Sikh riots case. The bench rejected his plea saying he was wasting court time and was making "a frontal attack intended to humiliate the judge" and warned of invoking contempt proceedings.

Among the Delhi-centric issues, the high court dealt with matters relating to nursery admissions, running of schools, unauthorised construction and the menace of air pollution.