The governor gave the new government time till November 30 to prove its majority in the Assembly. 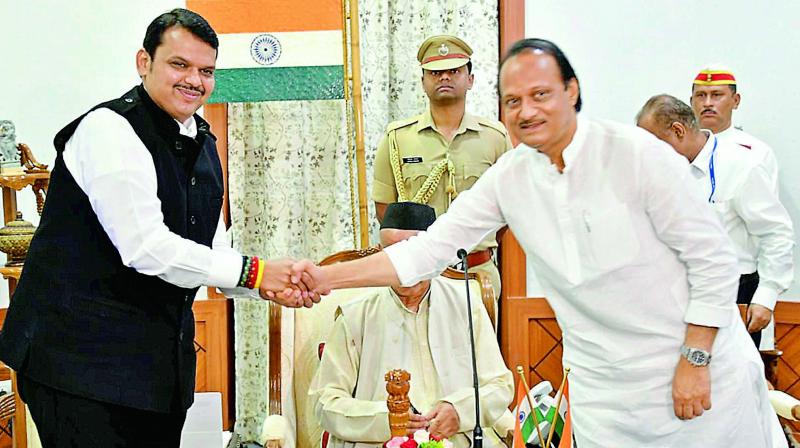 Mumbai: Politics in Maharashtra was turned on its head as the BJP, in a midnight coup, snatched triumph from the Maha Vikas Aghadi — the Shiv Sena, NCP and the Congress — by engineering a split in the Sharad Pawar-led NCP on Saturday.

In a dramatic early morning development, Maharashtra governor Bhagat Singh Koshyari swore in Devendra Fadnavis as chief minister and rebel NCP leader Ajit Pawar, who had the support of some NCP MLAs, as deputy chief minister.

The governor gave the new government time till November 30 to prove its majority in the Assembly.

However, in another twist, the NCP claimed that the majority of MLAs that had initially gone with Ajit Pawar had returned to the party fold.

It sacked Ajit Pawar as the leader of its legislative party in the evening and in his place appointed Jayant Patil, a trusted lieutenant of Sharad Pawar.

Till Friday, the Sena-NCP-Congress alliance looked set to form the next government, with Sena chief Uddhav Thackeray as the likely chief minister. It was not to be.

In the early hours of Saturday, the governor announced that the President’s rule stood revoked. It launched a series of developments that not only rocked state politics but also thwarted the Maha Vikas Aghadi’s bid to form a government.

The operation was carried out in total secrecy and no one had a clue.

Later in the day, however, the NCP claimed that most of those MLAs had returned.

“We had no idea of the reason we were taken to Raj Bhavan,” Mr Shingane claimed. “We stand with Sharad Pawar.” The Congress, the NCP and the Sena criticised the Union government and the governor for the haste shown in administering the oath to Mr Fadnavis. Sharad Pawar described Ajit Pawar’s decision to join hands with the BJP as an act of indiscipline, and said Ajit and other party MLAs who switched sides would attract provisions of the anti-defection law.

Claiming that the new BJP-led dispensation would not pass the floor test, he asserted that the Shiv Sena-NCP-Congress combine had the numbers and would ultimately form the government.

“Sins are committed in the dark of night,” said Uddhav Thackeray.

Meanwhile, Mr Fadnavis said the BJP would provide a strong government which would work for farmers. Thanking BJP workers after taking oath, he said, “Modi hai to mumkin hai (Everything possible under leadership of Prime Minister Narendra Modi).”