India   All India  24 Nov 2019  Did Maharashtra governor do the right thing?
India, All India

Did Maharashtra governor do the right thing? 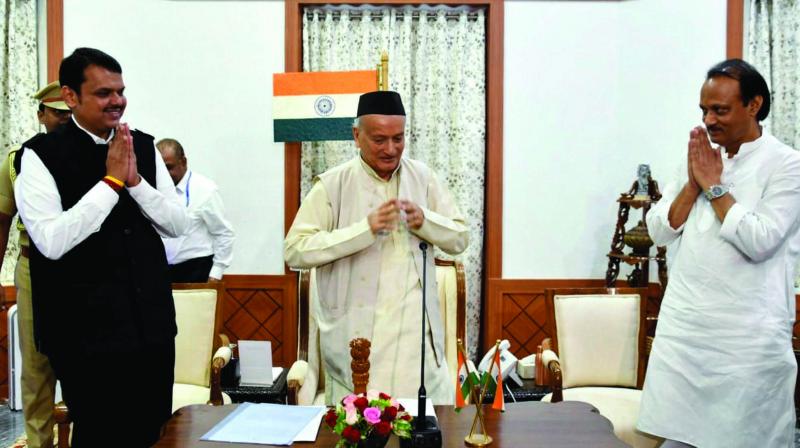 New Delhi: The swearing-in of Maharashtra chief minister Devendra Fadnavis by governor Bhagat Singh Koshyari has come under flak with legal and constitutional experts describing the governor’s action as hasty, arbitrary and unconstitutional vulnerable to challenge before the top court.

Even as confusion prevailed through the day as to how many of the Nationalist Congress Party’s legislators in Maharashtra Assembly have thrown their weight behind deputy chief minister Ajit Pawar, senior lawyer Prashant Bhushan has described Governor Koshiyari’s action in administering the oath both to Fadnavis and Pawar as “unconstitutional” and “murder of democracy”.

Senior counsel Sanjay Hagde wondered as what “objective material” was available with governor to satisfy him that the BJP, which had refused to form the government for the want of support, was now having majority backing on the floor of the state Assembly.

“It is totally a fraud on democracy and really amazing that these people worked overnight to murder democracy. It is astounding that it was not only carried out in such a haste but in total secrecy,” Mr Bhushan said, describing the action of the governor as “unconstitutional” and a “fraud” on the Constitution.

In a poser, Bhushan asked, “How did he (Governor) know that these people have the numbers. Governor knew that NCP was negotiating with Shiv Sena and Congress for the formation of the government in the State.”

On the morality of the entire action, Mr Bhushan said that the governor knew that BJP and the NCP had fought Assembly election against each other.

Constitutionally taking a dim view of governor Koshyari’s action, senior counsel Hagde said that the governor is “well adviced to ask chief minister Fadnavis to convene the assembly forthwith to prove his majority on the floor of the House.”

Any delay, Mr Hegde said might “render his decision vulnerable to judicial review.”

Questioning governor Koshyari’s decision in administering the oath to Fadnavis and Pawar, Mr Hegde said, “The Governor should have solid reasons to satisfy  himself that the party (BJP)  which had refused to form the government was now in a position  to claim majority support on the floor of the House.”

Without “objective material” backing his decision to administer oath, Mr Hegde said that in the absence of such objective material, “the governor’s hasty administration of oath will be suspect.”

“The governor would be well advised to ask the newly sworn in chief minister to convene the assembly forthwith to prove his majority on the floor of the House. Any delay in this regard may render his decision vulnerable to judicial review,” Mr Hegde said, making it clear that sooner things in the state becomes clear better, it would be for democracy.