The party further went on say that the alliance of Shiv Sena, NCP and Congress is intact and will defeat the Fadnavis govt on the floor of the House. 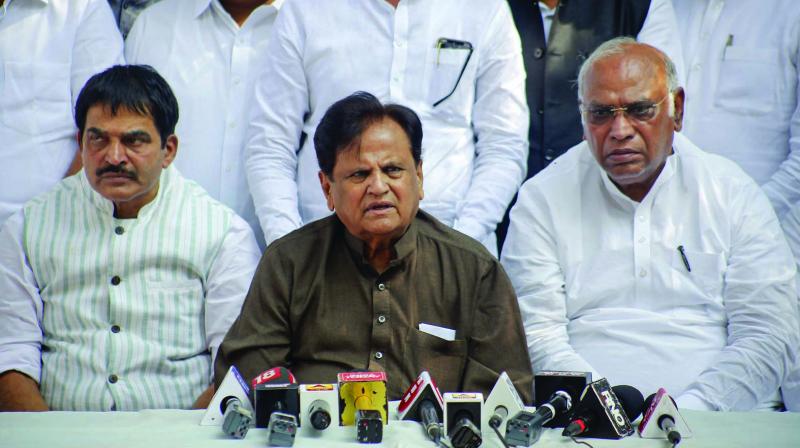 New Delhi: The Congress Party lashed out at the Bharatiya Janata Party (BJP) on Saturday after Devendra Fadnavis was sworn in as the chief minister by Maharashtra governor at 7.30 am, along with Ajit Pawar of the Nationalist Congress Party (NCP) as the deputy chief minister.

Addressing a press conference, Congress spokesperson Randeep Singh Surjewala said the BJP “scared” an “opportunist” — i.e. Ajit Pawar who has joined hands with the saffron party — and acted as a “contract killer” of democracy.

The party further went on say that the alliance of Shiv Sena, NCP and Congress is intact and will defeat the Fadnavis government on the floor of the House.

Senior Congress leader Ahmed Patel, speaking with reporters in Mumbai, said, “The BJP has crossed all limits of shamelessness. Our three parties we will defeat the government in the floor test. We will explore all political and legal options.” He also added that the list of MLAs submitted to the governor by Ajit Pawar was “not verified” and the governor did not speak to anyone else. Attacking Maharashtra governor, Bhagat Singh Koshiyari, the Congress termed him as the “hit man” of Union home minister Amit Shah. “The governor of Maharashtra, instead of protecting his constitutional duties, has acted as a hit-man for the home minister, Amit Shah. To sell the mandate given by people of India by auctioning the trust of the legislatures has now become a norm for the BJP post Karnataka, Arunachal Pradesh, Meghalaya, Goa, Uttaranchal, Haryana and Manipur. Now the BJP is seeking to trample upon Constitution of India and its mandate in a similar fashion in Maharashtra,” Mr Surjewala said. On Friday evening, the Maharashtra governor cancelled his weekend trip to Delhi for a three-day conference and decided to stay in Mumbai.

For the 7.50 am oath ceremony, President’s Rule was revoked at 5.47 am after a signoff by President Ram Nath Kovind. According to reports, there was no meeting of the Union Cabinet, as is the practice in such decisions. The PM can clear a decision without his Cabinet in cases of “extreme urgency”, according to rules.

A total of 10 questions were put up by Mr Surjewala to the BJP on Saturday. These include when is the BJP going to stake claim to form the government, how many legislators signed the letter of support, how were these signatures verified in an hour?

The party feels that since the governor had called the BJP, Shiv Sena and NCP to form the government, it should have also called the Congress. According to the party it was not given a fair chance by the governor and instead a government was sworn in “in the middle of the night” and given seven days to prove its majority.

In 2018 in Karnataka, when the governor had given 15 days to the B.S. Yediyurappa to prove his majority, on the petition of the Congress the Supreme Court slashed the period to 24 hours.

Presently, 42 MLAs of the Congress out of 44 are in Mumbai while the other two are reaching Mumbai. The Congress plans to shift its MLAs back to Jaipur again so as to ensure that its flock is intact till the floor test.