BJP, wary of Shiv Sena, had ‘Plan B’ before polls 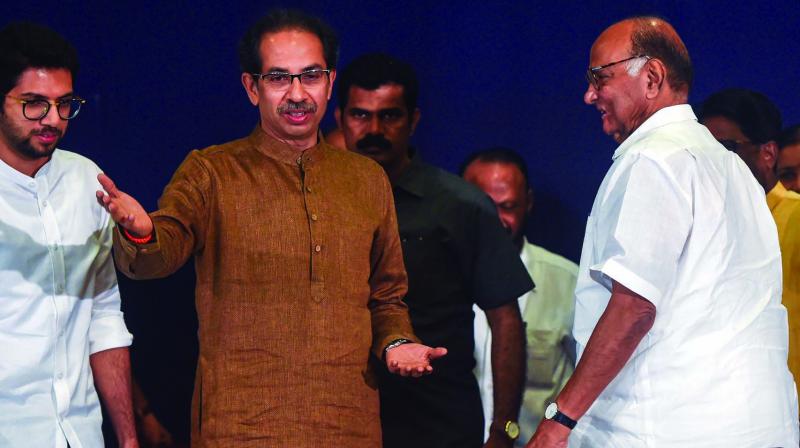 New Delhi: Maharashtra’s political thriller continued on Saturday even as in an early morning development the BJP’s Devendra Fadnavis took oath as the chief minister along with NCP supremo Sharad Pawar’s nephew, Ajit Pawar, as his deputy chief minister, contrary to what was being predicted till late Friday evening.

The NCP supremo, who had been holding talks with the Congress and the BJP’s estranged ally, Shiv Sena, over possible government formation headed by Sena supremo Uddhav Thackeray, claimed it was Ajit Pawar’s “personal decision” and that the NCP “does not support or endorse this decision of his.” However, many found it hard to believe that the NCP supremo did not have a clue as what was going on within his own outfit.

By Saturday evening, Ajit Pawar was replaced by Jayant Patil as the NCP legislature party leader. Now, only a floor test will prove whether or not Mr Fadnavis will continue as Maharashtra’s chief minister, a post that he held in the last government and over which the BJP’s ties with the Shiv Sena soured.

As allegations and counter allegations flew thick and fast throughout the day and the BJP came under fire for betraying people’s mandate and trying to form an “illegitimate government,” the BJP said that it had the “electoral and moral” mandate to form the government. Hitting back, the BJP said those who were “dead opposed” to each other had joined hands to “grab” power.

Though it remains to be seen whether a Fadvavis-led government continues or not, many in Maharashtra political circles are of the view that the Sena and Congress are expected to lose significantly as both are considered “ideological adversaries.”

On the other hand, Asaduddin Owaisi-led AIMIM is expected to gain the ground lost by the Congress as both the Congress and NCP seem to have lost the “secular tag” after their attempt to ally with the Sena, known for its firebrand Hindutva stance.

After Saturday’s development, rift within the Sena has also widened as many of its MLAs were against allying with the Congress and the NCP. For the BJP, the Sena losing its core votebank over its “change in ideology,” means political gain.

Despite the Sena’s acerbic statements against the BJP top brass since October 24, when results threw a hung Assembly, the BJP, sources said, had been sending out feelers to the Sena to patch things up till as recently as November 21, but making it clear that the chief minister’s post was non-negotiable.

Sources disclosed that the BJP top brass was wary of its now estranged ally, Shiv Sena, even before the two had finalised the pre-poll seat-sharing formula. The BJP, in fact, had activated its “Plan B” (in case Sena decides to part ways) a week before voting for Assembly polls took place.

Feedback from the ground suggested that a resurgent NCP could dent the BJP’s poll prospects and it was then when the BJP top brass opened back channel talks with senior NCP leaders for a possible post-poll alliance.

Political circles were abuzz when PM Narendra Modi praised the NCP on the first day of the Winter Session of Parliament and then held more than a half-an-hour long meeting with the NCP supremo to discuss “agriculture related issues.”

On Friday, the BJP’s Maharashtra election in-charge and national general secretary Bhupendra Yadav and an RSS leader, it was learnt, met Mr Ajit Pawar, after which Mr Fadvavis had a talk with BJP national president and Union home minister Amit Shah, who gave a go-ahead to Mr Fadnavis.

Expressing confidence that the BJP-led government enjoys the support of a majority of MLAs, Union minister Ravi Shankar Prasad asserted that Mr Fadnavis will give a “stable, honest and effective government” to the state. He, however, did not gave any numbers of how many MLAs are with the BJP but said the floor of the Assembly is the proper place for this and an “effective majority” will be proven.