The Citizenship Bill proposes to change the definition of illegal migrants. 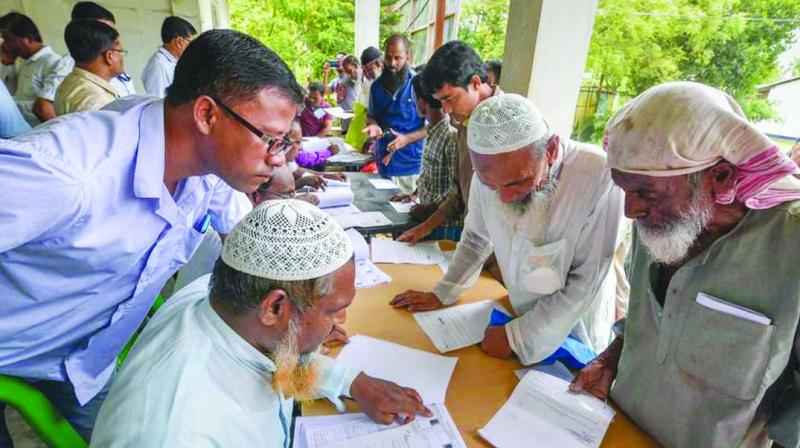 The NRC is being prepared as per provisions of the Assam Accord with the midnight of March 24, 1971 as the cut-off date.

Guwahati: The proposed Citizenship (Amendment) Bill, 2016, may not only compromise with the essence of the Assam Accord but also trigger a serious law and problem besides strengthening separatist voices in the state, say observers.

Chief adviser of powerful All Assam Students Union Samujjal Bhattacharya said, “If this controversial bill is passed even after such a massive outrage, people will lose faith in non-violent democratic movement. The Centre will be solely responsible for consequences.”

The Citizenship Bill proposes to change the definition of illegal migrants. The bill, introduced in the Lok Sabha on July 15, 2016, seeks to amend the Citizenship Act, 1955 to provide citizenship to migrants from Afghanistan, Bangladesh and Pakistan, who are of Hindu, Sikh, Buddhist, Jain, Parsi or Christian extraction. However, the Act doesn’t have a provision for Muslim sects like Shias and Ahmediyas who also face persecution in Pakistan.

Mr Bhattachary  said, “The Assam Accord was a result of a six-year-long democratic movement and if the Centre violates the Accord by passing the Citizenship (Amendment) Bill, it would send wrong signals and people would lose faith in democratic movements.”

“The Assam Accord was a national commitment and the Prime Minister had announced its signing from the Red Fort on Independence Day. The proposed amendment violates the basic clause that maintained all foreigners, who came illegally to Assam after the midnight of March 24, 1971, should be detected and deported,” he pointed out while regretting that the ruling BJP is trying to create disturbance in Assam just to protect its vote bank and, in the process,  working against national interest. He also alleged that the Citizenship (Amendment) Bill is a ploy to derail the process of updating the National Register of Citizens (NRC), which is going on under the constant monitoring of the Supreme Court.

The NRC is being prepared as per provisions of the Assam Accord with the midnight of March 24, 1971 as the cut-off date. If the bill is passed, the whole exercise will have to be started afresh as it will be impossible to include names of people who came to India up to December 31, 2014 in the already-prepared draft NRC.

The intelligence agencies have also warned that the proposed bill is bound to strengthen the separatist voice once again in the state. Special DGP (Special Branch) of the Assam Police, Pallab Bhattacharyya, said that the Citizenship (Amendment) Bill has deepened the rift between Assamese and Bengali-speaking communities - and given a new lease of life to the United Liberation Front of Assam (Ulfa-I).

Political observers in Assam say that the BJP, which aims to polarise the Hindu vote bank in West Bengal through a proposed amendment to the bill, would not only lose its goodwill among the indigenous people of Assam but also spoil the congenial atmosphere that was building for economic activities.

They refer to the speeches of Prime Minister Narendra Modi in the run-up to the 2014 Lok Sabha elections wherein he promised to scrap the land-boundary agreement between India and Bangladesh, which the previous UPA government had framed.