India   All India  24 Nov 2018  A quiet start to Track II discussions in Kashmir
India, All India

A quiet start to Track II discussions in Kashmir

Group of highly influential people of the country are in talks with Valley’s key players. 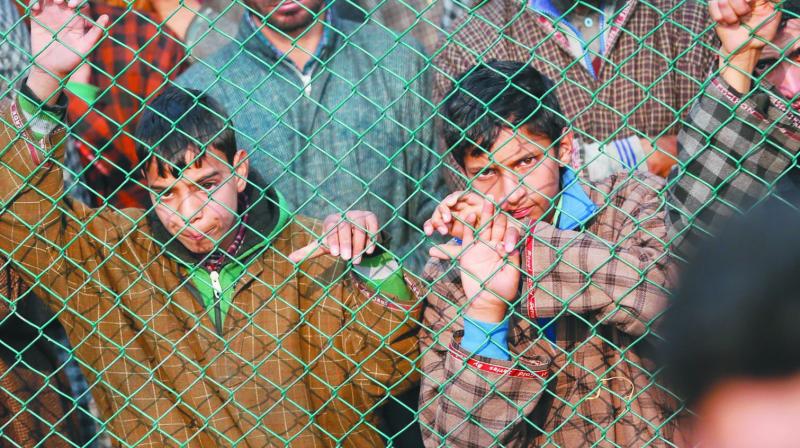 Kashmiri children at the funeral of a slain militant in Shopian, south of Srinagar.

SRINAGAR: Kashmir continues to be on the boil even though the level of violence has come down considerably in the past couple of months. The security forces have gained an upper hand against militants. More than 30 militants, including three top commanders, were killed by them in stepped up security operations in October alone and over a dozen, so far, this month. The men in olive and khaki continue to act with their iron fist and are hopeful about success.

But there is growing realisation among many in the government and even security establishment that the use of force will not solve the Kashmir problem and that a solution can only be achieved by talking to the people of the state. It would be naïve on part of the country’s policy makers and those at the helm of affairs to believe that by killing militants and cracking down against their overground workers and sympathizers will put an end to the imbroglio in the Valley, say the Kashmir watchers.

According to them, there is a stronger sentiment for aazadi (literally freedom) among a vast majority of Kashmiri Muslims which only deepens with each militant killing. They feel a sense of insecurity with India. Further there are many people within and outside the state who have acquired a deep and long- term vested interest in keeping the Kashmir issue on a permanent boil.

It is in order to defeat such elements and also to address the core issue that a group of highly influential people of the country has begun talking to the key players of the Kashmir politics as part of a fresh Track II initiative. Two members of the group were on a quiet visit of Srinagar recently during which they reportedly met some senior separatist leaders. The others in the group have also been in touch with them and other leaders through telephone and other medium of communication, the sources privy to the development said.

“There’s realization on both sides that confrontation, violence and iron fist will not help and, therefore, are willing to address the issues through dialogue. Whatever is being done is, however, happening outside the ambit of the official dialogue between the two sides,” said one of the group members who spoke to this newspaper on condition of anonymity. He added, “We’re trying to consolidate the effort and once that happens we will try to bring more people including those who disagree with us today within its ambit.”

The sources said that the separatist leaders have reiterated before the non-state negotiators that without involving Pakistan in talks nothing tangible can be achieved on Kashmir. However, one of them also said that in order to set the ball rolling and provide a propitious space to him and other separatists New Delhi should at the highest level publicly say that Kashmir is a political problem which needs to be addressed politically and avoid talking about a solution “will have to be found within the framework of the Indian Constitution”.

Once such an assurance is made by the Centre, he said, the separatist political leadership will try to convince the militants to suspend their activities for a while to give the Track II dialogue a chance. A separatist leader is reported to have told the mediators that a tripartite dialogue between India, Pakistan and Kashmiri representatives is the ideal way out on Kashmir. However, New Delhi does not seem to be in a mood to drop itself into such an adventure, not even unexpectedly.