Police said they do not have any equipment to measure decibel levels or smoke they emit to ensure only 'green' firecrackers are being used. 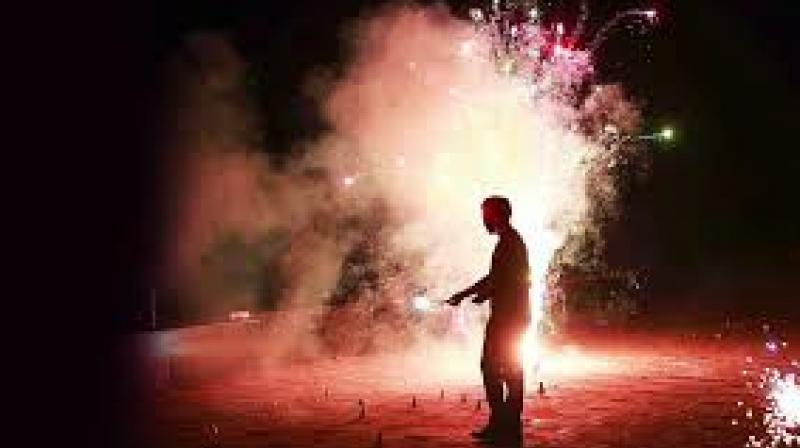 Social media, however, had a different take on the 'green crackers', with a large number of jokes and memes doing the rounds, including some associating the green colour with certain political parties. (Representational Image | File)

New Delhi: With the Supreme Court permitting only 'green firecrackers' for a less-polluting Diwali, the manufacturers on Tuesday said "no such thing" exists and environmentalists wanted authorities to work real quick to ensure compliance, while social media erupted with jokes with many simply colouring the crackers green.

Police officers said they do not have any equipment to measure the decibel levels of the firecrackers or the smoke they emit to ensure only 'green' firecrackers are being used and they would have to rely mostly on human intelligence and their sources on ground to ensure compliance.

"It will be a difficult task to monitor whether shopkeepers are following guidelines since crackers are sold in bulk during Diwali. Beat officers will have to be sensitised to ensure norms are not flouted," a police officer in Delhi said.

As per the court order, SHOs will be held liable if banned firecrackers are sold in their area.

Industry bodies, which peg the firecracker market at around Rs 20,000 crore per annum, said the court order, including restricting time to burn crackers to just two hours on Diwali and other festivals, would have a significant impact on sales and they will file a review petition.

D Saha, an environmental scientist who previously worked with the Central Pollution Control Board, said the authorities would now have to ensure that the norms are adhered to more strictly, especially at the manufacturing level.

"As a society, we have been using firecrackers to celebrate occasions, from festivals to landmark days and weddings to grand events, but there is a much bigger cost involved, the damage the bursting causes to the environment and of course the health hazards. So, we must behave more responsibly," he told PTI.

Asked how the decibel norms could be checked, Saha said the Petroleum and Explosives Safety Organisation (PESO) works on public safety regulations for explosive substances.

The Tamil Nadu Fireworks and Amorces Manufacturers' Association, which represents Rs 6,000 crore industry in the state, said they are already producing crackers after approval from the PESO.

K Mariappan, general secretary of the association, said the direction on use of only 'green crackers' won't work as "there is no such thing".

He said the cracker industry in and around Sivakasi in Tamil Nadu employs eight lakh people and the current year production has already been completed.

"We need to explain to the court that we cannot produce such (green) crackers. We may reduce the chemicals used in manufacturing.. But it will take more time", he said.

The court has said that the permissible limit of sound and smoke will be approved by the PESO.

"The PESO already has a centre in Sivakasi, home to some of India's largest fireworks manufacturer. And, since Diwali is approaching, the authorities would have to work quickly to ensure compliance," environmentalist Saha said.

Other environmental experts also hailed the court decision, saying anything that cuts emission level should be welcomed.

Gufran Beig of the System of the Air Quality and Weather Forecasting and Research (SAFAR) said use of 'green firecrackers' and restriction on timing of the use are good steps.

When asked what a 'green cracker' meant, he said, "Any such item which produces minimal toxicity and minimal fumes can be termed as a green firecracker."

Social media, however, had a different take on the 'green crackers', with a large number of jokes and memes doing the rounds, including some associating the green colour with certain political parties. Most of them simply posted pictures of crackers wrapped in green-coloured paper or threads, while some also put out pictures of famous personalities including actors wearing green.

On the business side, the Confederation of All-India Traders' Secretary-General Praveen Khandelwal said the annual fire cracker sales amount to Rs 15,000-20,000 crore, of which Chinese imports are at least Rs 5,000 crore.

"The apex court order will definitely impact sales, but is difficult to quantify losses as the industry operates mostly unorganised," he said.

Crackers imported from China are more toxic and the apex court ruling aimed at improving the quality of air during the festival season is a good move, he said.

Welcoming the court order, the West Bengal Pollution Control Board said it has already put in force a mechanism to stop the supply and sale of firecrackers beyond permissible decibel sound limits (90 decibel) in the past couple of years.

In West Bengal, crackers are burst for two consecutive days - for Diwali and on Kali Puja the next day. Tamil Nadu has a tradition to burst crackers early morning on Diwali, while it is done mostly on Dussehra in Karnataka.

Bengaluru-based environmentalist Suresh Heblikar said firecrackers mostly impact the cities already reeling under high pollution levels. He also said protection of livelihoods of those in Sivakasi is an imperative task too.

"Firecrackers are a traditional entertainment for the whole country. We cannot suddenly remove them," he said.

Some shopkeepers informed police officers in the national capital they do not have any fresh stock of firecrackers and the stocks are two years old and in such a short period of time they would not be able to get fresh stocks.