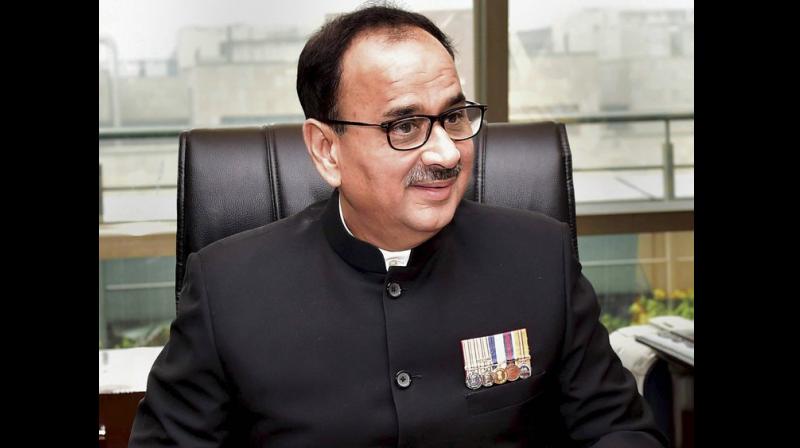 The Supreme Court has accepted Alok Verma's petition. It has agreed to take up his hearing on Friday, October 26. (Photo: File | PTI)

New Delhi: CBI director Alok Verma and Special Director Rakesh Asthana have been sent on leave amidst an internal rift at the country's top investigating agency.

M Nageshwara Rao, a joint director at the agency, has been appointed its interim director.

Nageshwar Rao, who hails from Warangal district in Telangana, is from the 1986 batch of Odisha cadre and supersedes Rakesh Asthana.

The move comes after a week-long standoff that began with CBI boss Alok Verma filing a case against his deputy, Rakesh Asthana, accusing him of bribery in an investigation.

The government's order last night followed a recommendation by the country's top vigilance officer, Chief Vigilance Commissioner, that the CBI's warring top two be sent on compulsory wait, stripped of all responsibilities.

Here are LIVE updates on infighting within CBI:

05:20 pm: The image of CBI will not be tarnished as the agency is for the country not for individuals, whatever investigation required is being done: CBI spokesperson.

04:45 pm: A CBI spokesperson said, "The team probing Special Director Rakesh Asthana’s case has been reconstituted for a fair, impartial and expeditious probe. We have put available best resources in the reconstituted team. There were searches and reports of sealing any offices are totally untrue. CBI is working normal."

03:50 pm: Asaduddin Owaisi speaking in favour of ousted CBI director Alok Verma said, " I have faith that top court will give relief to CBI director as it is a violation of section 4 of Delhi Special Police Establishment Act. I want to know which section did CVC use to remove him. Why is PM protecting a corrupt officer? All democratic institutions are being undermined."

03:12 pm: On Nageshwar Rao's appointment as CBI interim director, DMK chief MK Stalin said, "Several complaints were sent to CBI director against Nageshwar Rao and there are reports that the CBI director Alok Verma wanted to initiate investigations into allegations against him."

03:10 pm: "Is this move initiated to cover up the Rafale scam investigations? This shows an undeclared emergency has been imposed in our country. Appointment of a controversial officer like Nageshwar Rao is nothing but to ensure that CBI remains the caged parrot of the BJP government," added Stalin.

02:48 pm: A petition has been filed in Bombay High Court seeking setting up of a Special Investigation Team (SIT) for an investigation into Alok Verma - Rakesh Asthana issue. The petition also demands a retired Supreme Court judge in the SIT.

02:45 pm: "Institutions like CBI, CVC, judiciary, Election Commission are pillars of democracy. It is really sad that the chiefs of the topmost investigation agency are accusing each other of corruption. This is a big issue for the upcoming Parliament Session," Shiv Sena MP Arvind Sawant said.

01:45 pm: "CVC being misused by government, has no power to interfere in appointments," Congress alleged.

12:37 pm: "The CVCs recommendation and the government's action is intended to restore the institutional integrity and credibility of CBI," Union Minister Arun Jaitley said.

12:35 pm: Union Minister Arun Jaitley said, "CVC in its yesterday's meeting said neither these 2 officers (Arun Verma and Rakesh Asthana) nor any agency under their supervision can investigate charges against them. So the officers will sit out by going on leave. It's an interim measure".

12:25 pm: "CBI is a premier investigatiive agency, for maintenance of its institutional integrity, it is a pre-condition and absolutely essential for fair investigation," Union Minister Aruin Jaitley said.

12:05 pm: "What PM couldn't do directly by removing the CBI director and his collegaues, he has done surreptitiously and in clandestine fashion by taking shelter behind CVC. Has CBI director been transferred because he was about to order a probe into Rafale corruption," Congress Randeep Surjewala asked.

12:04 pm: "PM Modi has buried the last nail in the independence of CBI. The systematic dismantling and disintegration of CBI is complete. PM's systematic attack on credibility and capacity of CBI has now ensured that its credibility is dead and buried," Congress leader Randeep Surjewala said.

12:02 pm: "We don't know if CBI was investigating other issues like Rafale scam. If that was the case, it was ordered to protect the government, PM and concerned officers. Why was the DIG investigating the charges against Asthana has been sent to 'Kala Pani' in Andaman?," CPI(M) leader Sitaram Yechury said.

11:50 am: "I maintain that the integrity of the institution (CBI) is the most important. In an extraordinary situation, the government has full authority to act. At this time, an open fight between the top two people spells doomsday for the institution," former ASG Vikas Singh told news agency ANI.

11:27 am: CBI's JD (P) Arun Kumar Sharma, A Sai Manohar, HoZ V Murugesan and DIG Amit Kumar have been transferred/posted. They were a part of the team probing the case against CBI's Rakesh Asthana. 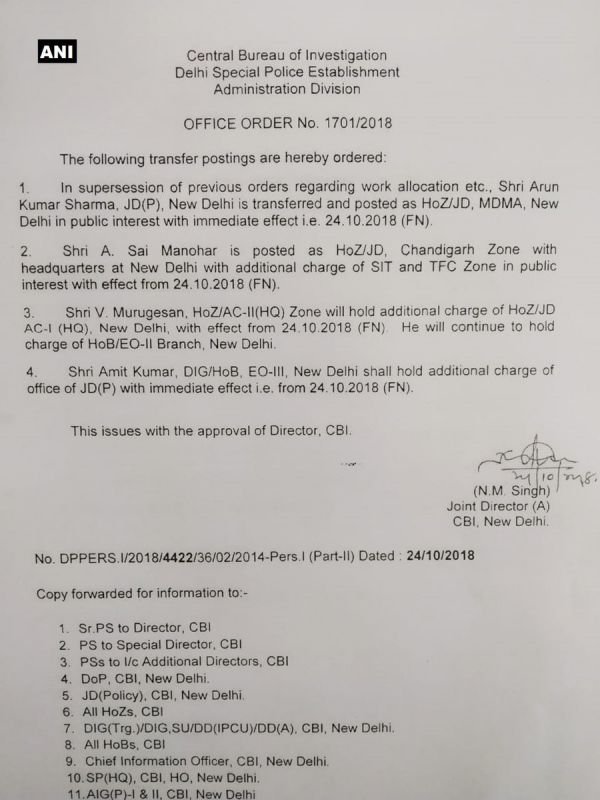 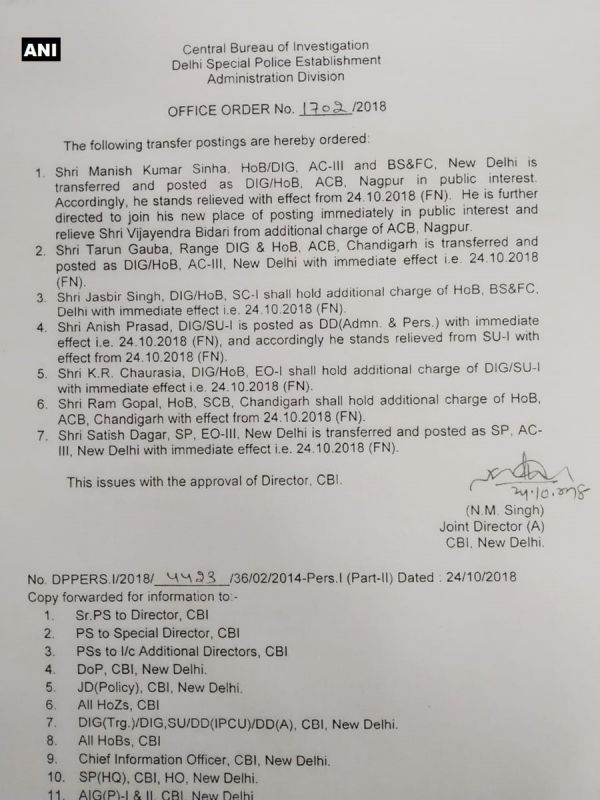 10:53 am: Interim CBI director M Nageswar Rao is currently inside the CBI's headquarters. He is there to attend a meeting of the agency's top officials.

10:49 am: Gopal Sankaranarayanan, lawyer appearing for Alok Verma, told the Supreme Court that the government on Wednesday morning, asked Alok Verma and Special Director Rakesh Asthana to go on leave compromising the investigation into many sensitive cases.

10:40 am: The Supreme Court has accepted Alok Verma's petition. It has agreed to take up his hearing on Friday, October 26.

10:29 am: Lawyer Prashant Bhushan reaches the court of the Chief Justice.

10:24 am: There would be no movement of officials or files at the CBI Director's office and Special Director Rakesh Asthana's office till 2 pm on Wednesday, news agency ANI quoted CBI sources as saying.

10:21 am: Alok Verma, the CBI chief who was sent on leave, will challenge the government order in the Supreme Court today.

09:05 am: Delhi Chief Minister and Aam Aadmi Party convenor Arvind Kejriwal tweets on CBI tussle: "What are the reasons for sending CBI director on leave?"

08:45 am: Prashant Bhushan in a tweet termed the appointment of M Nageswar Rao as interim director at the CBI "totally illegal".

08:35 am: CBI building has been sealed. Neither staff nor outsiders are being allowed, according to news agency PTI. The 10th and 11th floor of the CBI office in Delhi, which has the rooms of all these officers, are being raided.