The order was issued after considering depositions of 3 witnesses including Jay Shah, as well as documentary proof produced by his lawyer. 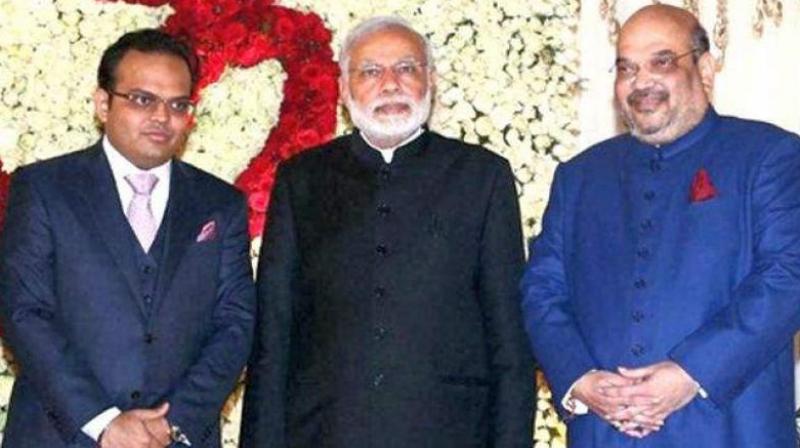 In his application to the court, Jay Amit Shah prayed for criminal action against the respondents for 'defaming and tarnishing' his reputation by publishing an article, which was 'scandalous, frivolous, misleading, derogatory, libellous and consisting of several defamatory statements.' (Photo: File | PTI)

Ahmedabad: An Ahmedabad court on Tuesday issued summonses to respondents in the criminal defamation case filed by BJP chief Amit Shah's son Jay against news portal 'The Wire' over a ‘derogatory’ report against Jay’s firms.

The metropolitan court issued summonses after it prima facie found that a case of defamation punishable with simple imprisonment for a term which may extend to two years, or with fine, or with both under section 500 of IPC was made out against all the seven respondents.

The order was issued after considering the depositions of three witnesses, including Jay Amit Shah, as well as documentary evidences produced by his lawyer S V Raju.

Making his submissions on Tuesday, Raju said, "The article was not published in good faith and was aimed at tarnishing the reputation of his client".

Before issuing summonses, the court conducted an inquiry into the complaint under CrPC section 202 to ascertain whether there was sufficient ground for proceeding against the respondents.

In his application, Shah prayed for criminal action against the respondents for "defaming and tarnishing" his reputation by publishing an article, which was "scandalous, frivolous, misleading, derogatory, libellous and consisting of several defamatory statements."

The seven respondents in the case are the author of the article Rohini Singh, founding editors of the news portal Siddarth Varadarajan, Sidharth Bhatia and M K Venu, managing editor Monobina Gupta, public editor Pamela Philipose and the Foundation for Independent Journalism, the non-profit company that publishes 'The Wire'.

The case has been filed under IPC sections 500 (defamation), 109 (abetment), 39 (voluntarily causing grievous hurt) and 120 B (criminal conspiracy).

Two businessmen – Jaimin Shah and Rajiv Shah – who appeared as witnesses, said they had received the article through WhatsApp and informed Jay Shah about it after realising that it "hurt" his reputation.

Appearing as a witness, Jay Shah also told the court that his friends and well-wishers told him that the article dented his reputation.

His lawyer Raju submitted before the court that the purpose of the article was not to give a bonafide account of the company or his client but to defame him keeping the state Assembly elections in mind.

He said there was "something fishy about the article" as it was "published hurriedly to make it an issue for the elections".

In his complaint, Shah said that the accused conspired to get a "fabricated, reworded, and edited version of the defamatory article to be published in place of the original version."

Raju told the court that Shah was given "unreasonable" time to respond to a questionnaire and claimed no further inquiry based on the response was made.

The complainant said a "predetermined conspiracy" was hatched to defame him.

A political storm erupted after the article titled 'Golden touch of Jay Amit Shah' was published. The Congress demanded sacking of Amit Shah as BJP chief and institution of a judicial inquiry into the entire episode, while the BJP called the article defamatory.