Pilot says Raje, Shah not on same page in Rajasthan

Countering BJP’s contention, Mr Pilot said that on the contrary, it was the BJP that was grappling with “infighting and groupism”. 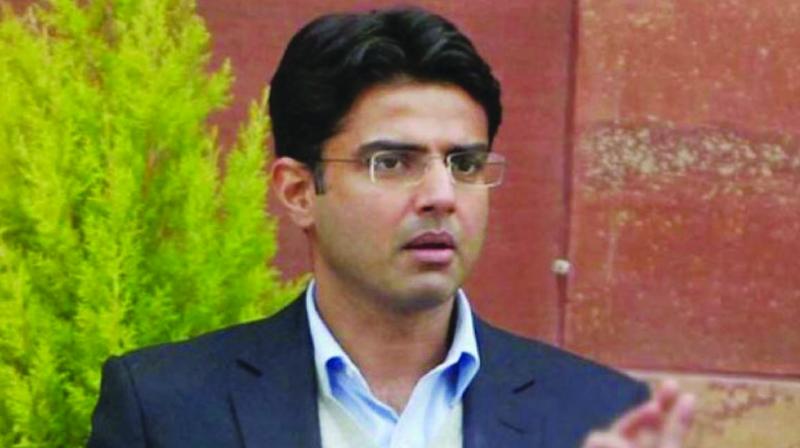 New Delhi: The BJP is facing “infighting and groupism” in Rajasthan which is evident from the two separate campaigns being run by party president Amit Shah and chief minister Vasundhara Raje, Congress’ state unit chief Sachin Pilot said Sunday, while asserting that all senior leaders in his party were on the same page.

Mr Pilot, who is spearheading the Congress charge against the Raje government, exuded confidence of a big win in poll-bound Rajasthan.

In an interview to PTI, Mr Pilot said that as the state unit chief, he has given his inputs on the issue of alliance and now it was up to party president Rahul Gandhi to take a final call on it.

“I am very proud that Rajasthan has very strong and very tall leaders in the Congress. All of them have contributed immensely to make the party as strong as it is today... Jitne zyada hain utna achcha hai (the more leaders there are, the better it is,” Mr Pilot said, rejecting BJP’s criticism of infighting in the Congress.

His remarks come following Mr Shah’s swipe at the Congress that it should decide whether it will be Pilot or Ashok Gehlot who will be the party’s chief ministerial candidate.

Countering BJP’s contention, Mr Pilot said that on the contrary, it was the BJP that was grappling with “infighting and groupism”.

On the raging Rafale issue, Pilot asserted that the BJP will have to give answers on the “scam” as it is bound to be a “burning issue” in the minds of the people in the upcoming Assembly elections.

He said the “revelations” by former French President Francois Hollande have left “no doubt” that there had been corruption in the Rafale deal.