Mr Manjhi’s demand for maximum seat share in Bihar is being seen as his tactic to put pressure on the RJD. 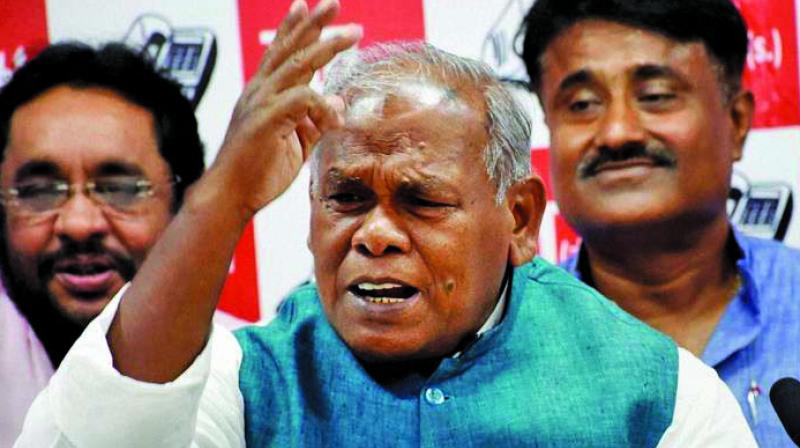 Patna: After the NDA, it's the RJD-led Grand Secular Alliance in Bihar where uneasiness over seat sharing is brewing. Former Bihar chief minister Jitan Ram Manjhi seems to have caused a fresh worry for the RJD by suggesting “a 20-20 formula” and asserting to contest on 20 of the 40 seats in the 2019 general elections.

Hindustani Awam Morcha (HAM) leaders claimed that the party has a good presence in at least 20 Lok Sabha constituencies and if given tickets Mr Manjhi can guarantee success on a “maximum number of seats”.

Mr Manjhi’s demand for maximum seat share in Bihar is being seen as his tactic to put pressure on the RJD.

Playing down reports of uneasiness in the Mahagathbandhan over seat adjustments, Congress leader Prem Chand Mishra said, “Trouble over seat sharing is brewing in the NDA, not in the ahagathbandhan. He (Jitan Ram Manjhi) may have given the statement only to motivate his workers. Agenda of this unity is to stop communal forces.”

Mr Manjhi who is considered one of the strongest Mahadalit leaders in Bihar is the only MLA from his party. He had floated his own political front in 2015 and became a part of the NDA after he was removed from the JD(U) for revolting against Nitish Kumar

“Seat adjustments as per the wishes of Mr Manjhi cannot be an easy task because the RJD and the Congress have been trying to rope in more secular parties into the Mahagathbandhan fold,” an RJD leader told this newspaper.

Sources claim that these political parties want “honorable” number of seats to contest as part of the Mahagathbandhan in Bihar. According to reports, the Begusarai seat has already been earmarked by the CPI for former JNUSU president Kanhaiya Kumar.

Sources familiar with the development said that RJD chief Lalu Yadav has agreed to vacate Begusarai seat for Kanhaiya Kumar but he has decided to make an announcement regarding the issue after seat adjustment is finalised with other coalition partners.

Sources said that as per the earlier plans, the RJD, being the largest party in Bihar Assembly, may keep the largest share of seats for itself, the Congress may get 10, while coalition partners the like HAM and others may get the remaining seats for the 2019  poll.