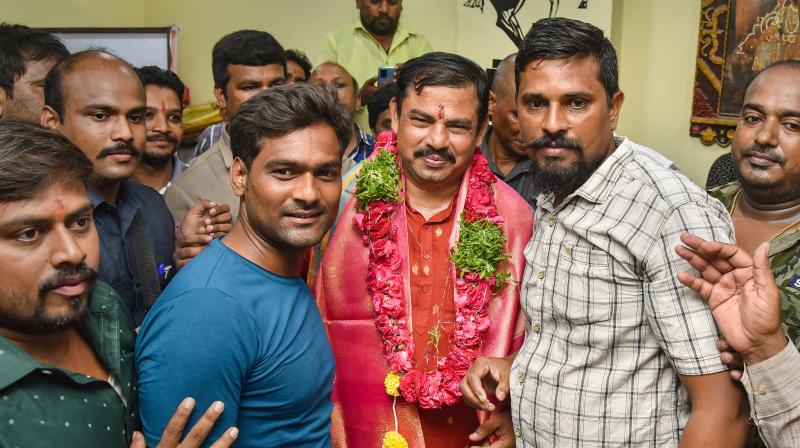 HYDERABAD: The police arrested BJP Goshamahal MLA T. Raja Singh in the morning and the party suspended him for his alleged objectionable comments on a religion. He released on conditional bail in the evening.

The BJP also held out the possibility of his expulsion following alleged derogatory and objectionable remarks in a video Raja Singh posted on Monday night on YouTube, The video was subsequently removed from the platform. However, before it was taken down, it quickly made the rounds on various social media platforms, angering people belonging to a certain community.

Angry groups of people, upset with the content of Raja Singh’s post, began protesting. Even as AIMIM MLAs Ahmed bin Abdullah Balala and Kausar Mohiuddin, among other party leaders, took to the streets to pacify the crowds, a case was filed against the BJP MLA at the Dabeerpura police station.

Owaisi alleged that Raja Singh’s comments were designed to destroy communal harmony in Hyderabad and Telangana, and added that inciting Muslims had now become a policy for the BJP.

Tuesday’s arrest of Raja Singh and his subsequent release after high drama during the day, was preceded by his stiff opposition to comedian Munawar Faruqui’s show in the city on August 20.

This is not the first time that Raja Singh butted heads with the comedian. Late last year, Faruqui’s show was cancelled following threats of disruption from Raja Singh. This time, the show was held amidst tight security. Raja Singh had said that he would post a ‘comedy’ video in response, and it was this video that resulted in his arrest and suspension from the party.

At the Nampally criminal courts where Raja Singh was produced after his arrest, tensions ran high for some time with groups of supporters from both sides gathering. The situation, however, never got out of hand because of heavy police presence and caning of both groups by the police to disperse them.

Raja Singh’s lawyer K. Karuna Sagar told reporters outside the courthouse that the police did not follow due procedure in arresting Raja Singh and the police’ remand request was rejected by the court. Raja Singh has been released on a personal bail of Rs.20,000, he said.