After the rejection of this application, the Nashik city police arrested Mr Rane at Sangameshwar in Ratnagiri 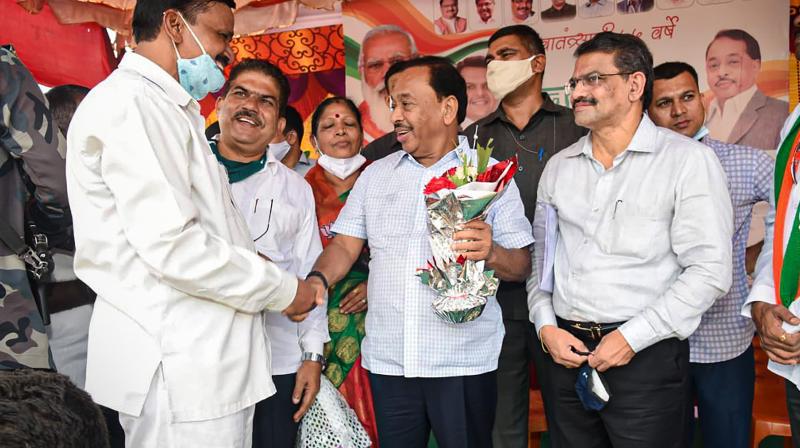 Union Minister Narayan Rane with BJP workers during the Konkan tour of 'Jan Ashirwad Yatra', at Sangameshwar in Ratnagiri district on Aug 24, 2021. (PTI)

Mumbai: In a day of high political drama, Union minister Narayan Rane was arrested on Tuesday by the Maharashtra police for his controversial remarks about “slapping” Maharashtra chief minister Uddhav Thackeray. He was taken into custody by the police in coastal Ratnagiri district, after the sessions court rejected his transit anticipatory bail application. His arrest has become the new flashpoint between allies-turned-rivals Shiv Sena and BJP.

These comments evoked sharp reactions from Shiv Sena workers, who protested against the minister all over the state. As many as four FIRs were registered against Mr Rane over his remark against the CM. All FIRs have been filed in different districts. His lawyers moved the Bombay high court seeking quashing of the FIRs, but the court refused to hear his petition on Tuesday itself and asked his lawyers to follow due process.

Mr Rane, a BJP leader who joined Prime Minister Narendra Modi’s Cabinet in July as the minister for micro, small and medium enterprises, is the first Union minister to be arrested from Maharashtra. Reacting to the arrest, Leader of the Opposition Devendra Fadnavis from the BJP said that he didn’t support Mr Rane’s comments, the arrest was an act of revenge.

“I want to make it clear that we do not support the comment about the chief minister, but we will stand by Mr Rane with all our strength. I want to tell the police commissioner that if there is no action against those who attacked our offices, then both Opposition leaders will sit on dharna at the police commissioner's office. There should be the rule of law, not Taliban rule,” he said.

BJP president J.P. Nadda said the arrest was violative of constitutional values, and his party would not be cowed down by such actions. In a tweet, Mr Nadda said the immense support the BJP has received in its “Jan Aashirvad Yatra” has jolted its rivals. “We will continue to fight democratically, the journey will continue,” he said.

Meanwhile, Shiv Sena MP Vinayak Raut has asked Prime Minister Narendra Modi to sack Mr Rane from the Union Cabinet. “To impress the BJP leadership, Mr Rane has been attacking the Shiv Sena and its leaders. He lost his mental balance after his induction into the Modi-led ministry. Mr Modi should show him the door,” Mr Raut said.

Mr Rane had approached a sessions court in Ratnagiri for pre-arrest bail. However, judge M.Q.S.M. Shaikh rejected the transit pre-arrest bail plea saying he could approach the concerned court for regular bail. After the rejection of this application, the Nashik city police arrested Mr Rane at Sangameshwar in Ratnagiri. He will be produced before the local court in Nashik.

Cases under various sections including 500 (defamation), 505(2) (mischief), 153-B (1)(c) (remarks likely to cause disharmony or feeling of enmity or hatred or ill will) of the IPC have been filed against Mr Rane for his comments.

Mr Rane’s lawyers also approached the high court seeking to quash all the FIRs filed against the minister. Advocate Aniket Nikam said: “It (the petition) could not be filed (in the Bombay high court) due to some technical defect, we will cure the defect and file it tomorrow.”

According to Mr Nikam, in the case of arrest for any offence which involves punishment of under seven years, the police had to issue notice. He said this had not been issued in Mr Rane’s case and hence the order for his arrest was illegal.