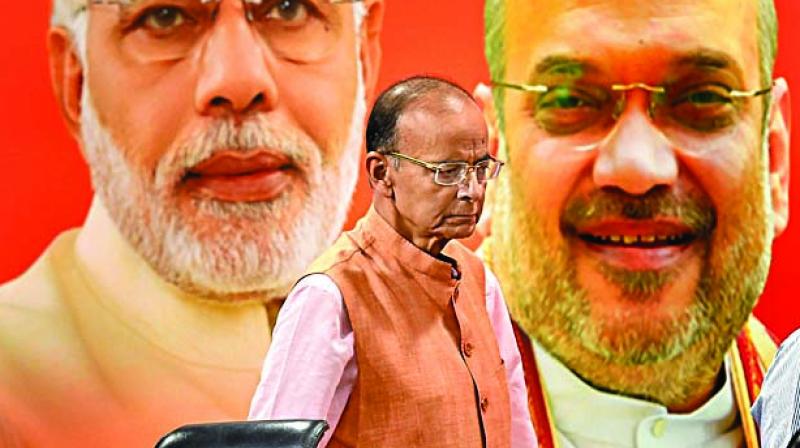 He was an articulate leader who made a lasting contribution to India. (Photo: PTI | File)

Prime Minister Narendra Modi, who is in UAE to receive the highest civilian award, called him a political giant and a towering intellectual.

He tweeted: "Arun Jaitley Ji was a political giant, towering intellectual and legal luminary. He was an articulate leader who made a lasting contribution to India. His passing away is very saddening. Spoke to his wife Sangeeta Ji as well as son Rohan, and expressed condolences. Om Shanti."

Arun Jaitley Ji was a political giant, towering intellectual and legal luminary. He was an articulate leader who made a lasting contribution to India. His passing away is very saddening. Spoke to his wife Sangeeta Ji as well as son Rohan, and expressed condolences. Om Shanti.

"Full of life, blessed with wit, a great sense of humour and charisma, Arun Jaitley Ji was admired by people across all sections of society. He was multi-faceted, having impeccable knowledge about India’s Constitution, history, public policy, governance and administration," he added.

"I am deeply saddened by the death of Arun Jaitley, Jaitley's departure is a personal loss for me. As him, I have lost not only a senior leader of the organization but also an integral member of the family whose support and guidance I have been receiving for years," Shah tweeted.

Defence Minister Rajnath Singh said, "Jaitleyji will always be remembered for pulling the economy out of the gloom and putting it back on the right track. The BJP will miss Arunji's presence. I extend my heartfelt condolences to his bereaved family."

Women and Child Development Minister Smriti Irani said, "A stalwart who paid tribute to his simple beginnings by helping those with meagre means. Orator par excellence, legal luminary @arunjaitley ji served the Nation and sangathan with dedication and zeal. My tributes to him. Condolences to loved ones. Om Shanti (sic)."

The Congress said, "We are deeply saddened to hear the passing of Shri Arun Jaitley. Our condolences to his family. Our thoughts and prayers are with them in this time of grief."

"Untimely demise of former FM and senior leader Sh Arun Jaitley ji is a huge loss to the nation. A legal luminary and an  experienced political leader known for his governance skills will be missed by the country. Thoughts and prayers with his family in this moment of grief. RIP," he tweeted.

West Bengal Chief Minister Mamata Banerjee said, "Extremely saddened at the passing away of Arun Jaitley Ji, after a battle bravely borne. An outstanding Parliamentarian & a brilliant lawyer, appreciated across parties. His contribution to Indian polity will be remembered. My condolences to his wife, children, friends & admirers."

Deeply pained & anguished on the sad demise of our old friend, friend & guide of the society, veteran stalwart leader #ArunJaitley.
The whole nation grieves his loss. He led over four decades in public life effectively & satisfyingly. He had enormous leadership qualities & was a

Minister of Railways and Commerce and industry  Piyush Goyal stated that Jaitley as like an elder brother to him anfthat the nation will face an ireepairable loss after his demise.

Shri Arun Jaitley ji's demise is an irreparable loss for all of us.

The nation is in mourning. My deep condolences to his family in this moment of grief. Om Shanti.

Union finance minister, Nirmala Sitharaman expressed her condolonces saying that Jaitley was a great mentor for her and that she had learnt a lot from him.

No words can describe the loss of Shri @arunjaitley. A mentor to many of us, a guide and a moral support and strength. Have learnt so much from him. A fine large-hearted person. Always ready to help anyone/everyone. His intelligence, sagacity, astuteness have no match.

Deeply saddened by the tragic passing of my friend&DelhiUniv senior @arunjaitley⁩. We first met when he was at DUSU& I was President of StStephen’sCollegeUnion. Despite political differences we enjoyed a healthy mutual respect&debated his Budget often in LS. A great loss4India pic.twitter.com/RzxO1V6NTV

Deeply saddened by the demise of Former Union Minister Shri. @arunjaitley. His contribution to build our Nation is immense. Let God give strength to his family and well-wishers to bear this loss.#ArunJaitley

Sad to hear that former Union Minister #ArunJaitley ji has passed away. My thoughts are with his family in this time of grief. May his soul rest in peace.

Minister of Civil Aviation Suresh Prabhu posted a pcture of himself with Atal Bihari Vajpayee and Arun Jaitley saying, "only memories remain."

Rajya Sabha MP, Kabil Sibal posted a photo of himself and Arun Jaitley in memory. The photo caption read, "Together in cricket."

His tweet further read that his dear friend's "seminal contibutions to the polity as FM" will be remembered.

Very sorry to learn that Arun Jaitley is no more . An old friend and a dear colleague will be remembered for his seminal contributions to the polity and as FM of India . As Leader of Opposition he was without match . He always stood steadfastly for his friends and for his party .