Congress in a fresh row on ‘demonising’ of PM

Singhvi said demonising the Prime Minister was “wrong” and acts must be judged issue-wise, not person-wise. 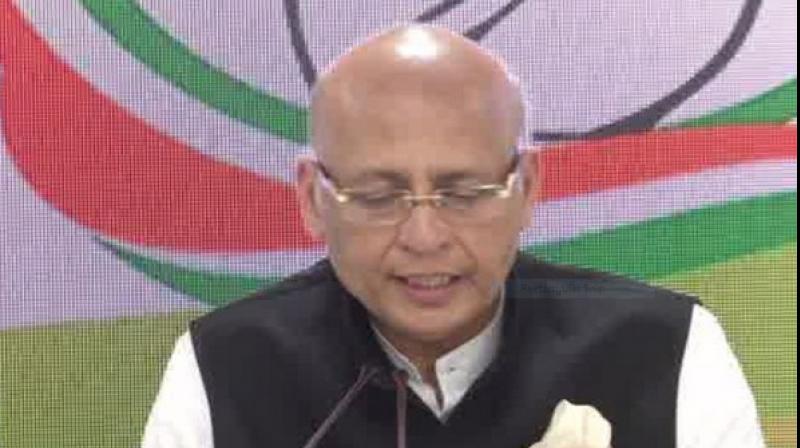 New Delhi: The Congress was caught in a new controversy on Friday as a section of senior leadership came out and said that Prime Minister Narendra Modi should not be demonised “just like that”.

A day after senior leader Jairam Ramesh, it was the turn of his Rajya Sabha colleague Abhishek Manu Singhvi to speak on those lines on Friday.

Mr Singhvi said demonising the Prime Minister was “wrong” and acts must be judged issue-wise, not person-wise.

“Always said demonising Modi wrong. Not only is he PM of nation, a one way opposition actually helps him”.

“Acts are always good, bad and indifferent—they must be judged issue wise and not person wise. Certainly, ujjawala scheme is only one amongst other good deeds,” he said.

“As you know I have argued for six years now that Narendra Modi should be praised whenever he says or does the right thing. Which would add credibility to out criticisms whenever he errs. I welcome others in Opposition coming around to a view for which I was excoriated at the time”.

Mr Ramesh had said at a book launch on Thursday, that Mr Modi’s governance model was “not a complete negative story”, adding that not recognising his work and demonising him all the time was not going to help.

Mr Ramesh had also cited how successful the Pradhan Mantri Ujjwala Yojana (PMUJ) had turned out for Mr Modi.

The comments by these leaders assume significance as former Congress president Rahul Gandhi had carried on personal attacks on  the Prime Minister before the Lok Sabha elections.

Picking on the Rafael issue, Mr Gandhi had coined the slogan “Chowkidar Chor Hai” to target the PM.

After the miserable showing at the hustings, Mr Gandhi had in the first stocktaking CWC meeting blamed the senior leaders for not doing their best to take his slogan to the masses.

However, asked for an official reaction on  the comments by the senior leaders, Congress spokesperson Manish Tewari said : “It is better to ask those leaders what they meant”.