The protesters were taken into preventive custody as they did not have permission to meet the Chief Minister. 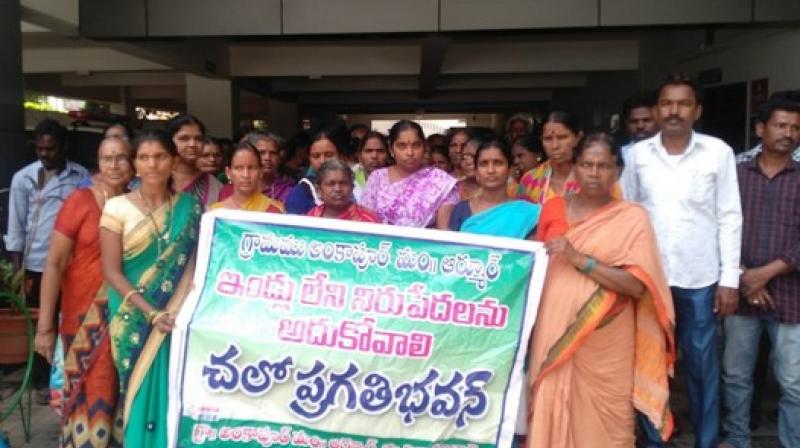 The villagers were later shifted to Goshamahal police stadium and will be released after some time, the police added. (Photo: ANI)

Hyderabad: Over 50 protesters were detained by Hyderabad police on Wednesday after they were seen appealing to Chief Minister to fulfill his promise of providing two-bedroom flats to the residents of Ankara Village.

According to the police, 51 villagers including men and women from Ankapur village of Nizamabad District came to Hyderabad on Wednesday morning and to meet the Chief Minister K Chandrashekar Rao.

The protesters were taken into preventive custody as they did not have permission to meet the Chief Minister.

The villagers were later shifted to Goshamahal police stadium and will be released after some time, the police added.

According to the villagers, Chief Minister, in a visit to Ankapur village in 2014, CM K Chandrashekar Rao had promised them 165 double bedroom houses.

Santosh, a protester told ANI, "In the year 2014, the Chief Minister had visited our village and promised us 165 double bedroom houses in the presence of other TRS party leaders. The construction had started but it stopped and has not resumed in the last four years."

"We demand that the double bedroom houses should be constructed and given to us at the earliest," Santosh added.

Telangana Government had launched the '2BHK Housing Scheme' in 2015 to construct 2BHK flats in Hyderabad and other urban areas of Telangana to provide quality and respectable housing to the poor.