Defence Minister to decide on Rs 10,000 crore worth defence deals in August

The first defence acquisition council meeting to be chaired by Defence Minister Rajnath Singh is scheduled to take place in August. 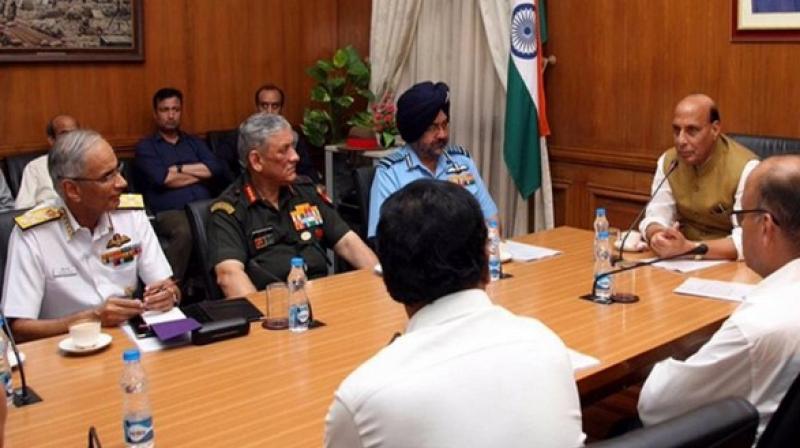 New Delhi: In his maiden Defence Acquisition Council (DAC) meeting, Defence Minister Rajnath Singh is scheduled to decide on acquisition of weapon systems worth around Rs 10,000 crore including choppers and electronic warfare systems.

The first defence acquisition council meeting to be chaired by Defence Minister Rajnath Singh is scheduled to take place in August first week in the south block.

This is also the first time that the DAC would be meeting after the Narendra Modi government returned to power.

"At present, the Defence Minister is scheduled to decide on a case related to the acquisition of 14 medium-lift choppers for the Indian Coast Guard which are likely to cost more than Rs 7,000 crore," government sources told ANI.

The case is for the acquisition of 14 choppers and a tender is planned to be issued to multiple vendors from Europe, America and Russia for supplying these helicopters, they said.

The case was processed earlier also but had to be scrapped by the Defence Ministry due to certain discrepancies in it.

A European vendor had been selected as the lowest bidder over an American firm in the previous process.

The Defence Acquisition Council is the highest decision-making body in the defence ministry for deciding on new policies and capital acquisitions for the three services and the Indian Coast Guard.

The DAC also gives final clearance for projects worth up to Rs 2,000 crore.

During the DAC meeting, the Defence Minister will also take a call on the proposed procurement of two electronic warfare systems for deployment along the Pakistan and China border by the Indian Army.

Though the DAC is meeting for the first time since the new government was formed, the Modi administration has already spent around Rs. 8500 crore for meeting the emergency requirement of the forces in its first 50 days.

Weapon systems such as the Spice 2000 stand off bombs and Spike anti-tank guided missiles from Israel, Strum Ataka air-launched ATGM and several other spare parts from Russia have been acquired under these powers by the Indian Air Force.