BJP hits back at RaGa hug with poem

The BJP had claimed that Mr Gandhi might “forcibly hug” the PM but the people “would not embrace him in next year’s Lok Sabha election.” 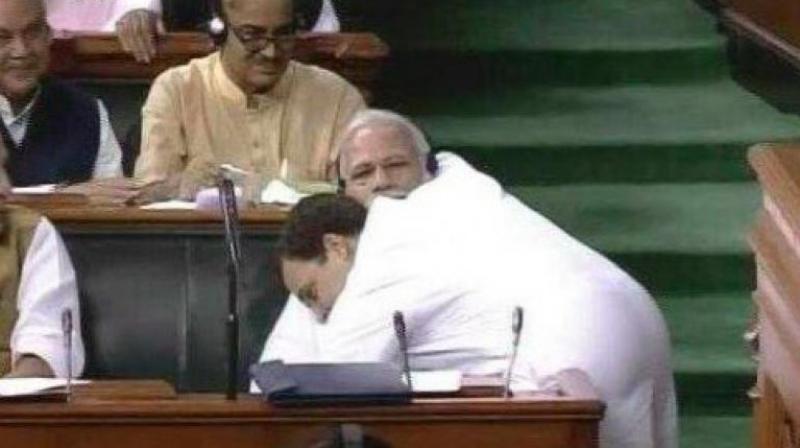 After finishing his speech on the no-confidence motion, Congress president Rahul Gandhi went over to where PM Narendra Modi was seated. After shaking his hand, Mr Gandhi hugged the Prime Minister in a spontaneous gesture, leaving the whole House stunned and smiling. (Photo: PTI)

New Delhi: Congress president Rahul Gandhi’s bear hug and wink in Parliament last week continues to rile the BJP as the party’s official Twitter handle on Monday took potshots at Mr Gandhi with a poem after he tweeted on the Alwar lynching issue claiming that in PM Narendra Modi’s “brutal ‘New India’” humanity is “replaced with hatred and people are crushed and left to die.” The BJP had claimed that Mr Gandhi might “forcibly hug” the PM but the people   “would not embrace him in next year’s Lok Sabha election.”

After ending his speech in Lok Sabha last week on the no-trust motion, Mr Gandhi, in a surprising move, went up to the prime minister at the treasury benches and hugged him. While many appreciated Mr Gandhi for his bear hug to the PM, the BJP criticised him for not following the Parliament’s decorum.