During his speech on Friday, the Congress chief had also accused the Prime Minister of favouring “one industrialist” in the Rafale deal. 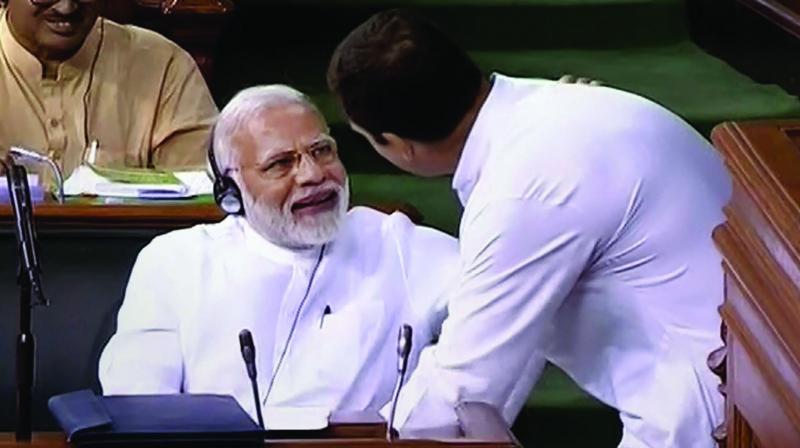 New Delhi: The BJP and the Congress have resorted to a war of privilege notices over the Rafale fighter jet deal that was raised by Congress president Rahul Gandhi during the debate on the no-confidence motion on Friday. Both the parties have accused the rival’s ministers and leaders of “misleading” the Lok Sabha.

On Monday when four BJP members submitted a privilege notice against Mr Gandhi to Lok Sabha Speaker Sumitra Mahajan, and Opposition Congress decided to soon pay back the ruling BJP in the same coin by pressing a privilege motion against Prime Minister Narendra Modi and defence minister Nirmala Sitharaman for “misleading” the House.

“We are talking to lawyers on whether a privilege motion can be moved against the PM. Once that is clear we will move the motion,” a Congress leader said.

Speaker Ms Mahajan, meanwhile, has said that she will examine the privilege notice against Mr Gandhi received from four BJP MPs — Nishik-ant Dubey, Anurag Thakur, Dushyant Singh and Prahlad Joshi — who have accused the Congress president of “misleading” Parliament by making “false” allegations against Mr Modi and Ms Sitharaman.

During the debate on the no-confidence motion, Mr Gandhi had taken the Modi government head-on, claiming that French President Emmanuel Macron had told him in a meeting that the Indian government was free to divulge details on the Rafael deal despite a secrecy clause between the two countries.

During his speech on Friday, the Congress chief had also accused the Prime Minister of favouring “one industrialist” in the Rafale deal.

On Monday, Congress MP and former defence minister A.K. Antony dismissed the BJP’s claim that a secrecy clause with France was forcing the government to not reveal the jets’ price.

He claimed that there was no clause in the 2008 pact between India and France that prevents the government from divulging price details of the Rafale deal.

Mr Antony said that the government cannot hide the price details of the Rafael jets as the deal has to be scrutinised by the Comptroller and Auditor General (CAG) as well as Parliament’s Public Accounts Committee (PAC).

The Congress claimed that the price of 36 Rafale jets, as per an international bid in 2012 during the UPA government, came to Rs 18,940 crore.

However, the Modi government purchased the same number of aircraft for Rs 60,145 crore and asked the BJP to explain the “extra amount” of Rs 41,000 crore paid from public money.

“This price is apparent from the ‘Annual Report, 2016’ of Dassault Aviation,” said a Congress leader.

Mr Antony alleged the government owes Parliament an explanation on why Mr Modi and Ms Sitharaman “misled” the nation on the price issue.

He maintained that the French government had no objection in revealing the price of the Rafale aircraft and this was conveyed by the French President to Mr Gandhi.

Congress chief spokesperson Randeep Singh Surjewala added that the stand taken by the defence minister in Lok Sabha is clearly a matter of breach of privilege.

The BJP countered by claiming that according to rules of the House, Mr Gandhi should have given prior notice before making any allegations against any member. “He should have given substantiating material to the Speaker,” said parliamentary affairs minister Ananth Kumar.