India   All India  24 Jul 2017  Separatists call for shutdown in Kashmir against 'illegal' arrest of leaders, activists
India, All India

Separatists call for shutdown in Kashmir against 'illegal' arrest of leaders, activists

The (NIA) on Monday arrested seven second-rung Kashmiri separatist leaders and activists on the charges of terror funding. 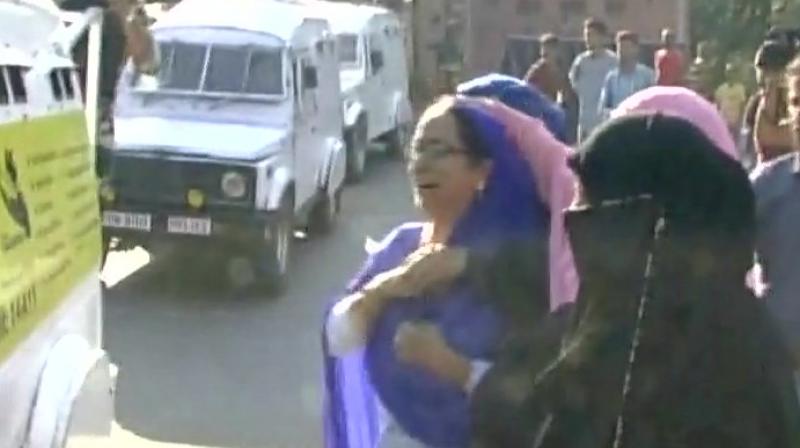 The NIA has been probing alleged funding of terror and subversive activities in Kashmir Valley after a national TV channel had in May this year in a sting operation showed three separatist leaders admitting on camera that they had received funding from Pakistan and Hafiz Muhammad Saeed, a co-founder of Lashkar-e-Taiba (LeT) and the chief or amir of Jama'at-ud-Da'wah, which has had sanctions placed against it as a terrorist organisation by the United Nations.

Those who were arrested include Altaf Ahmed Shah alias Fantosh, a son-in-law of separatist patriarch Syed Ali Shah Geelani. Shah, perceived as an influential force in Geelani’s Tehrik-e-Hurriyat party, was in the custody of Jammu and Kashmir police after he was taken into prevention detention in the last week of June following a request from the NIA.

The others arrested on Monday are Ayaz Akbar, Raja Merajuddin Kalwal and Peer Saifullah –all close aides of the octogenarian separatist leader-, Farooq Ahmed Dar alias ‘Bita Karate’, a leader of a faction of Jammu Kashmir Liberation Front (JKLF) and Naeem Ahmed Khan, the leader of National Front. Also arrested by the NIA is Shahid-ul-Islam who is the media advisor/secretary to another prominent separatist leader and Kashmir’s Chief Muslim cleric Mirwaiz Umar Farooq.

An alliance of key separatist leaders has called for a shutdown in Kashmir on Tuesday against “revengeful, arbitrary and illegal” arrests.

The alliance which calls itself ‘Joint Resistance Leadership’ and has Geelani, the Mirwaiz and JKLF chairman Muhammad Yasin Malik on it said in a statement, “They have been arrested by the NIA on fabricated charges.”

It added, “The leadership expressed serious concern about the safety of these people after their sudden arrests as no one has been able to establish contact with them and their whereabouts are not known.”

The NIA had a few weeks ago conducted raids at 23 places in Srinagar, Delhi and Haryana in connection with alleged hawala operations between Pakistan-based terror groups and Kashmiri separatists and claimed seizing about Rs 20 million cash, incriminating documents, letter-heads of some militant outfits, laptops and mobile phones.

Those whose houses and offices were searched besides Khan, Dar, Islam and Saifullah Gazi are Javed Baba, Zaffar Akbar Butt alias Saif-ul-Islam and business tycoon Zahoor Ahmed Watali. Later, some of these leaders and activists were called to Delhi by the NIA for further questioning.

They were accused of funding the unrest in the Kashmir Valley and the NIA claims that it has obtained “irrefutable evidence” pointing out to involvement of the accused in terror funding and other subversive activities.

But the separatists’ alliance on Monday reiterated, “It is a drama enacted by the Government through its agency, the NIA, of first raiding, then questioning and now arresting these people and thereby  giving the impression that law and procedures had been followed and then these people arrested on grounds of some evidence being found to link them to  the alleged charges”.

It alleged, “The sensationalizing propagandist anti-Kashmir electronic media of India was also brought into play to aid and abet this drama and deceit”.

The NIA had in June registered an FIR in which Hafeez Saeed has been named as an accused besides both factions of the All Parties Hurriyat Conference led by Geelani and the Mirwaiz, militant outfit Hizb-ul- Mujahideen and all-women rightwing Dukhtaran-e-Milat organisation.