India   All India  24 Jul 2017  No report whether they're dead or alive: Iraq on 39 Indians abducted by ISIS
India, All India

No report whether they're dead or alive: Iraq on 39 Indians abducted by ISIS

Iraq Foreign Minister said there is no report about them whether they are dead or alive and Iraqi govt is doing its best to locate them. 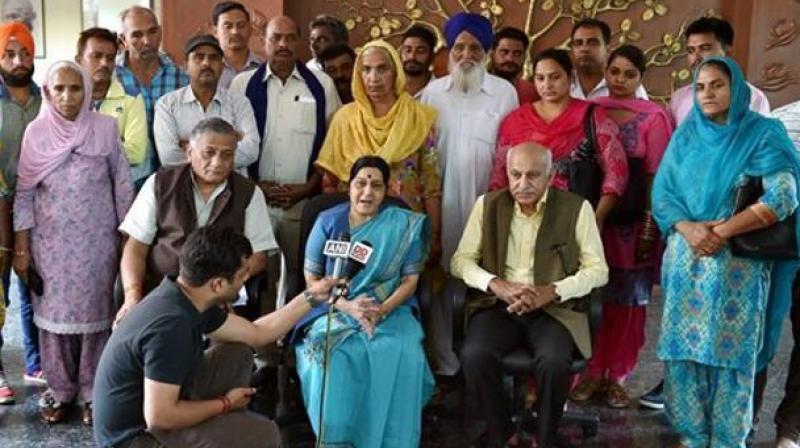 New Delhi: Iraq Foreign Minister Ibrahim al-Jaafari on Monday he was not sure about fate of 39 missing Indians, who were held captive by Islamic State in Mosul.

He said there is no report about them whether they are dead or alive and added that the Iraqi government is doing its best to locate them.

"We're not 100 percent sure whether they're alive or not, we don't know. We are going to do our best, but till now we cannot say anything about their fate," al-Jaafari said.

Earlier, the Iraq Embassy in India informed that search operations are underway to locate the 39 missing Indians, and assured there is a high level coordination between concerned Iraqi and Indian authorities to locate them.

Sushma Swaraj, along with Ministers of State (MoS') for Ministry of External Affairs (MEA) MJ Akbar and Gen (Retd) VK Singh, met families of 39 Indians who have been missing in Iraq since July 16, 2014.

She said "Indian authorities have been informed that the missing Indians were last located in a prison in Badush, so as soon as the area is cleared, further developments would be reported".

Sushma had assured, "Once fighting stops in Badush and the area is cleared, we can probably find out about the whereabouts of the missing nationals.