India   All India  24 Jul 2017  Mumbai biker crushed to death by truck after her bike hits pothole
India, All India

An accidental death report has been registered and the truck driver has been arrested. 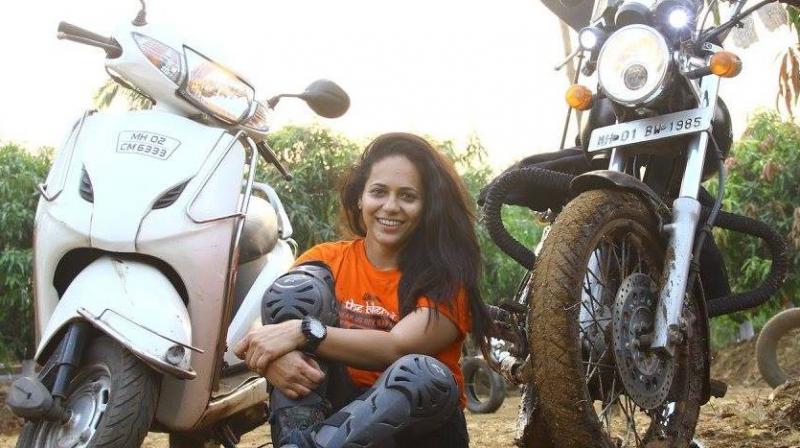 Jagruti Hogale, a member of the all-women 'Bikerni' motorcycle club, was on a trip with two other bikers to Jawhar in Palghar district on Sunday when the incident occurred. (Photo: Facebook/Jagruti Viraj Hogale)

Mumbai: A 36-year-old biker was killed when she was thrown off her two-wheeler after hitting a pothole on a road near Mumbai and was crushed by a passing truck.

Bandra-resident Jagruti Hogale, a member of the all-women 'Bikerni' motorcycle club, was on a trip with two other bikers to Jawhar in Palghar district on Sunday when the incident occurred, a police official said.

The advertising professional tried to overtake a truck on the Jawhar-Dahanu road around 9 am but her bike landed in a pothole, throwing her off.

She was then crushed under the wheels of the truck, the official said, quoting an eye witness.

Hogale was rushed to a hospital where she was declared dead before admission, Kasa police station's assistant police inspector Jaiprakash Guthe said.

The biker had earlier driven up to Khardung La in Ladakh, one of the highest motorable roads in the world, the police official said.

An accidental death report has been registered and the truck driver has been arrested.

He has been booked under the IPC sections 304-A (causing death by negligence), which carries a punishment of up to two years in jail, and 279 (rash driving or riding on a public way), which provides for up to 6 months in prison, Guthe said.

This is the fourth death this year caused by vehicles skidding on potholes on the Jawhar-Dahanu road, police said.

On July 4 this year, an 18-year-old boy was killed when he lost control over his motorcycle while trying to avoid a pothole at Bhiwandi Naka in the neighbouring Thane district.

He fell from the vehicle and later died of head injuries. Earlier, a 21-year-old man was killed when his two-wheeler landed in a pothole near the state-run JJ Hospital in Mumbai in September last year.

Popular radio jockey Malishka Mendonsa recently incurred the wrath of the Shiv Sena which controls Mumbai's civic body for a satirical song on pothole ridden-Mumbai roads during the monsoon.