She said the MPs had torn official papers and thrown it towards the Chair, prompting members of treasury benches to shout 'shame, shame'. 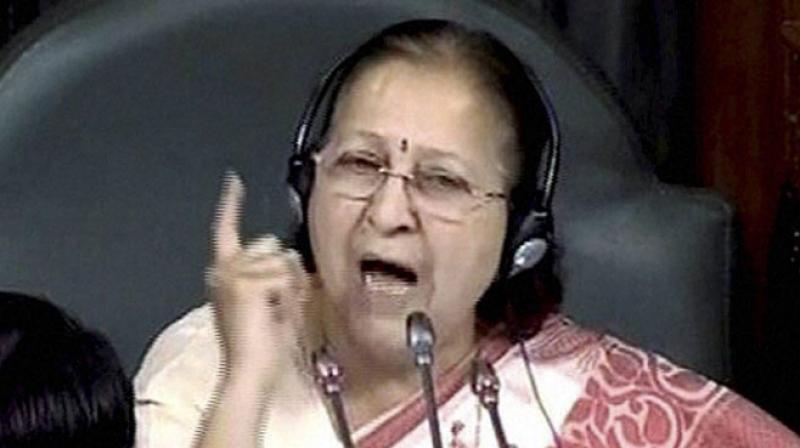 New Delhi: Six Congress members from the Lok Sabha were suspended for five days by Speaker Sumitra Mahajan on Monday on the ground of "highly unbecoming" conduct during their protests over the lynching issue that "undermined the Chair's dignity".

Mahajan announced her order as soon as the House met at 2 pm following an adjournment.

In her order, she said all these members had torn official papers and thrown it towards the Chair, prompting members of the treasury benches to shout "shame, shame".

Some of these members had picked up papers from the Lok Sabha secretariat staffers' table and had torn and thrown them, Mahajan said.

She said all this had happened despite her agreeing to a discussion on the issue of alleged atrocities against Dalits and Muslims.

Leader of the Congress in Lok Sabha Mallikarjun Kharge and a few other members had raised the issue of atrocities and she had allowed them to speak, Mahajan said.

Parliamentary Affairs Minister Ananth Kumar had also agreed to a discussion on the issue, but despite that many members stormed the Well, she said while pronouncing the order.

They did not stop despite her repeated requests to them to return to their seats and instead, indulged in improper conduct, she said, while adjourning the House till 2.30 pm.

As she pronounced their suspension, many Congress members again trooped into the Well, with KC Venugopal being heard telling her that she should suspend all Congress members. Congress President Sonia Gandhi was also present in the House.

When the House reassembled at 2.30 pm, Congress members were joined by the Left in protesting against the suspension, prompting Deputy Speaker M Thambi Durai to adjourn the House for the day.