Police said probe has so far revealed that 2 Pak militants were involved in the attack and that they received active support from 2 locals. 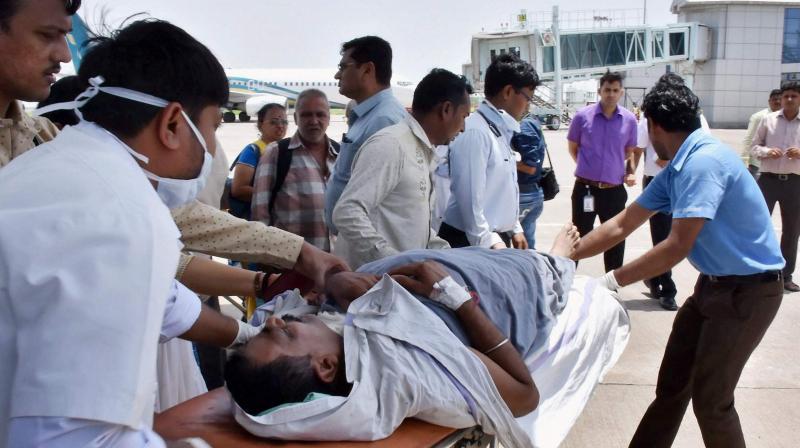 File photo of one of the Amarnath pilgrims, injured in the terror attack in Jammu and Kashmir, after being brought to the Surat airport in an IAF plane. (Photo: PTI)

Srinagar: Jammu & Kashmir police on Monday claimed that it has identified an 'over-ground' workers' group of Lashkar-e-Taiba that had extended logistical support to gunmen involved in the July 10 terror strike in Anantnag district, which led to the death of eight Amarnath pilgrims.

Inspector General of Police (Kashmir Range) Munir Ahmed Khan said that “considerable progress” has been made in the probe into the bloody incident, which evoked widespread condemnations in Jammu and Kashmir and rest of the country.

He said that the investigation has so far revealed that two Pakistani militants were involved in the terror act and that they received active support from two locals.

“The over-ground workers of the terror group who provided logistical support have been identified by the police,” he said.

Ahmed Khan added that the police are investigating thoroughly whether the two local LeT militants Jibran and Saad, who were killed at Bragpora on July 17, were in any way involved in the attack or not”.

Khan said that four over-ground workers of the LeT have been arrested. They had been tasked with the job to transport arms and ammunition from north Kashmir to south region of the state.

“We developed this input and identified a vehicle which they were using. Four days ago, in the evening that vehicle was intercepted but people inside that fled. The vehicle has been seized and we have recovered a magazine from it,” he said.

“Next day, we searched the area and arrested some persons. We also recovered an assault rifle. Four people have been arrested, so far,” he added.