The outcome of their research was published in Scientific Reports, a Nature Group publication, recently. 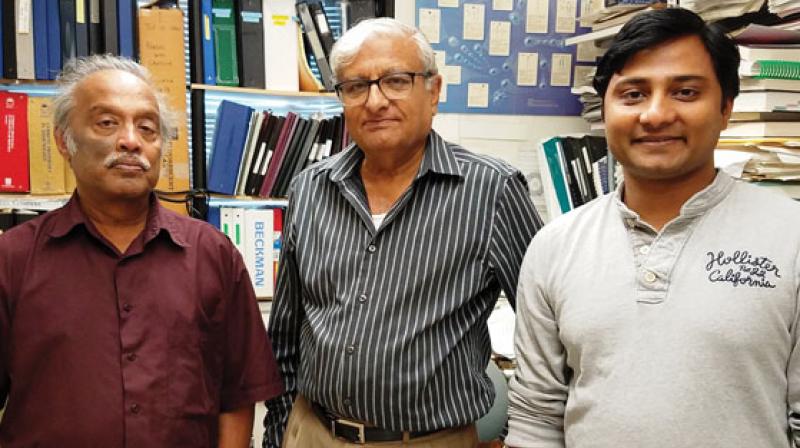 For a change, it’s not a nail-biting India vs Pakistan cricket outing, but a team effort by an Indian chemist and a Pakistani biologist, which has stirred much excitement

Chemistry is all about studying matter. But matter in all forms is about how atoms and molecules are glued by a variety of bonds. Most often, these atoms and molecules stay fastened on their own, but sometimes connect under high pressure or temperature.

One bond in the field of Chemistry, albeit between two professors, has stirred excitement in the scientific world as the duo has discovered a new technique in diagnosis of cancer cells, an important breakthrough which holds the potential for development of targeted therapies to combat the disease. Beyond the realm of scientific research, this unique bond as well as the discovery of a new method to distinguish between healthy cells and cancerous cells has kindled admiration because it turns the geopolitical situation in the sub-continent on its head. For, these professors, who disclose this is a small but vital step in cancer research, are Prof R V Krishnamurthy and Prof Prof Karim Essani, a Kerala-born chemist and a biologist from Karachi, both faculty at the Western Michigan University, USA.

These professors used the natural abundance of stable nitrogen isotopes to investigate amino acid metabolism in human colorectal cancer cells. The amino acids are the essential building blocks of proteins and an understanding of how the amino acids are used by cells is of great importance. It is especially true for cancerous cells. And, isotopes are atoms of the same element that differ in the nuclear mass which influences physical and chemical reaction rates. Stable and radioactive isotopes of carbon are used extensively medical research but generally using material artificially enriched in the heavier isotope. In their novel approach, the professors looked at the nitrogen isotope ratios of individual amino acids.

The outcome of their research was published in Scientific Reports, a Nature Group publication, recently.

Prof Krishnamurthy, who is an isotope chemist specializing in earth science, says: “I have studied isotope ratios in amino acids extracted from meteorites in the past and extending it to medical research, particularly cancer, had been on the back of my mind for a while for a long time, but I could not proceed until I found the right collaborator in Prof Karim who is a professor in our biology department and an expert in virology. He is widely recognized for his work on the use of viruses in cancer therapy. We were also fortunate to involve Dr Yogesh Suryawanshi who is a doctoral student with additional MBBS degree”.

He said in an email interview:  “Nitrogen is particularly attractive since most transformation of amino acids involve nitrogen rather than carbon”. The scientists analyzed the nitrogen isotope ratios in individual amino acids in healthy and cancerous cool rectal cancer cells and showed that by using nitrogen isotopes one can get information on the metabolism of amino acids in cancerous cells. They focused on Glutamic acid which is a non-essential amino acid meaning it can be made in the body. An essential amino acid on the other hand has to be supplemented by diet. The research by this group revealed that Glutamic acid metabolism is different in cancerous cells than in healthy cells.

Prof Krishnamurthy and Prof Karim Essani concur:  “carbon, hydrogen, oxygen and nitrogen are part of all life forms and biochemical reactions involving them are of paramount interest. In this, stable isotopes are arguably the best tracers.”

And these two professors bond so well that their camaraderie extends to discussions on movie songs, Gazals, and of course cricket. “”Although Prof Krishnamurthy and I have been working in the same campus for over 25 years we met only when he came up with this project idea. He read a press release about me in the campus newspaper and felt I was the right person to pursue his idea of using isotopes in cancer research. Once we met we were nostalgic about our background and realized how similar we were in our upbringing and cultural back ground. We talked about movie songs, Gazals and at one time sat together and watched briefly the Champion’s trophy between India and Pakistan on Prof Krishnamurthy’s computer! I was watching cricket after decades,” says Prof Karim Essani.

Prof Krishnamurthy explained: “The research involved creation of healthy and cancerous cells and extracting individual amino acids from these for isotope analysis. The full ramifications of this technique is too early to emphasize. For one thing our focus was on how certain amino acids are used by cancerous cells when compared to healthy cells. We feel the technique can be a diagnostic tool as well as possibly developing targeted therapies. Based on this study, it is too early to compare with other methods. The main thing is this uses the natural abundance of nitrogen isotopes. Since we are not a commercial lab, I can’t talk about a cost analysis. We are exploring the possibility of applying this with other cancer types.”

So the bond could only get stronger in future!