The MRM claimed that it had conducted a special signature campaign against Article 370 and 35A and collected over 8.5 lakh signs of Muslims 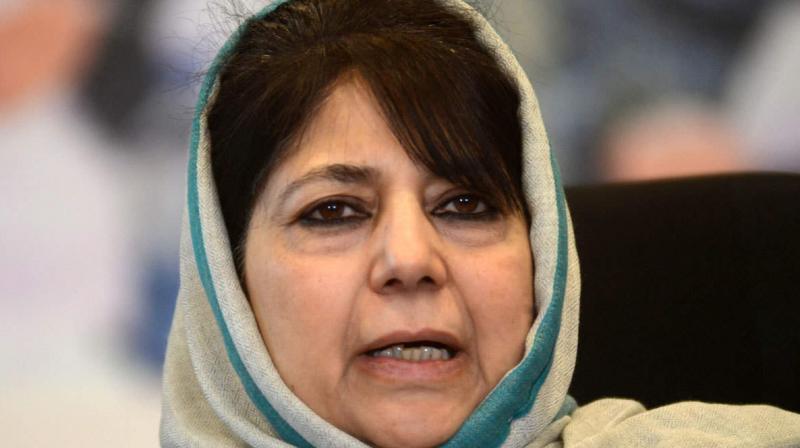 PDP leader Mehbooba Mufti had said the Centre should hold dialogue with everyone including Pakistan to resolve the Kashmir issue. (PTI Photo)

Hyderabad: The Muslim Rashtriya Manch (MRM) in Telangana on Thursday condemned the comments of PDP leader Mehbooba Mufti that India should initiate dialogue with Pakistan to resolve the Kashmir issue, saying it was against the 'national integrity' and 'unity'.

Referring to Mufti's remarks, MRM's Telangana convener M A Sattar said, "She (Mehbooba Mufti) said that the special status was snatched away from them and it was a mistake and it was an illegal and unconstitutional act. Peace shall not return to J&K unless Article 370 is restored."

"She also brought in the issue of involving Pakistan in resolution of the Kashmir issue." Other parties of the Gupkar Alliance like the National Conference, CPM and the Congress have seconded the views expressed by Mehbooba Mufti on Article 370, MRM, the Muslim wing of RSS, claimed in a release.

"The MRM is of the view that the statements of the leaders of these parties are in direct contravention to the national integrity and unity," it said. Terming as 'temporary' the special status granted to J&K through Article 370 and 35A, the organisation said the Modi government had taken a right step in abrogating the divisive and temporary provision.

The MRM also urged the Centre not to entertain such suggestions and demands from any political party. The MRM claimed that it had conducted a special signature campaign against Article 370 and 35 A and collected over 8.5 lakh signatures of Muslims, including over 70,000 from Kashmir, and submitted a memorandum to then President late Pranab Mukherjee demanding abrogation of the said articles.

Ahead of Prime Minister Narendra Modi's all-party meet, PDP president Mehbooba Mufti had on Tuesday said peace in the region cannot be restored without undoing the "illegal" and "unconstitutional" act of revocation of the special status of the erstwhile state of Jammu and Kashmir.

Addressing reporters at the end of a huddle of the People's Alliance for Gupkar Declaration (PAGD), she said during the meeting with the PM on Thursday, she would press for the restoration of the special status of Jammu and Kashmir, which was "snatched away from us".

Mufti had said the Centre should hold dialogue with everyone including Pakistan to resolve the Kashmir issue.