India   All India  24 Jun 2019  Authorities on alert after locust attack warning in Rajasthan
India, All India

Authorities on alert after locust attack warning in Rajasthan

A helpline number has been launched. Last major locust outbreak was in Rajasthan in 1993 and insects have been sighted after a 26 year gap. 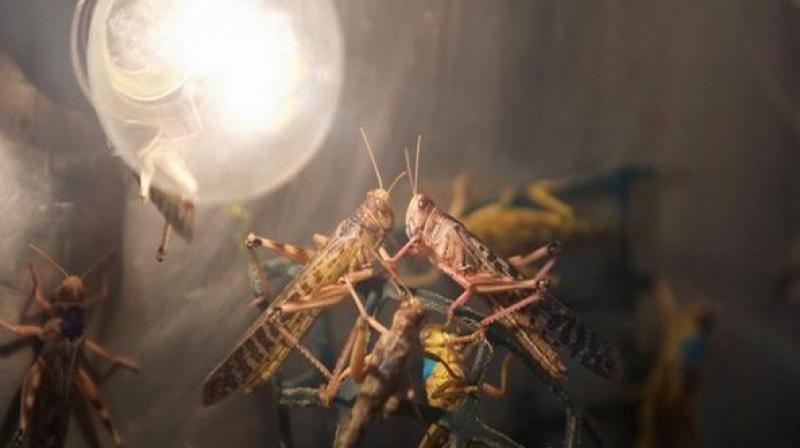 Adult locust swarms can fly up to 150 kilometres in a day with the wind and adult insects can consume roughly their own weight in fresh food per day. A very small swarm eats as much in one day as about 35,000 people, posing a devastating threat to crops and food security. (Photo: ANI)

Barmer: In the wake of a locust attack threat from across the Pakistan border, authorities here have gone on an alert to deal with a swarm of the tropical grasshoppers entering India since the insects can devastate standing crops.

After locust sightings in border villages around Jaisalmer, the Jodhpur-headquartered Locust Warning Organisation (LWO) has stepped up efforts to tackle any major attack by the grasshoppers by conducting a mock drill and is ready with an adequate stock of pesticides.

However, the locust threat is only confined to nearby villages as the insect cannot fly long distances. However, it spreads with the help of the wind or desert storm which occurs during the summer season in the Rajasthan desert.

A helpline number has also been launched. According to the LWO, the last major locust outbreak was reported in Rajasthan in 1993 and the insects have been sighted after a gap of 26 years.

LWO teams are operational in the border areas of Bikaner, Jodhpur, Barmer and Phaloldi and have sprayed insecticides.

According to an official, locusts are active from the summer to the rainy season and the breeding grounds for such grasshoppers are the coastal areas of Balochistan in Pakistan.

"Locusts have been seen in Jaisalmer. These have come from Pakistan and may spread to places such as Barmer, Jaisalmer, Phalodi, Bikaner and Suratgarh," Mahesh Chandra, a senior LWO official in Barmer. said.

"We have kept our machines ready and a mock drill has already been conducted. The grasshoppers' season is from June to October. A fresh stock of pesticide 'malathion' has also been brought. The situation is under control here. We have also launched a helpline number," he added.

Pakistan has reportedly sprayed pesticides from planes to deal with the locust attack and Prime Minister Imran Khan is himself taking stock of the situation.

Officials and scientists from India and Pakistan had held a meeting at the border village of Munabao here on June 19 to discuss the locust outbreak and possible joint action to tackle it.

According to a locust situation update by the UN Food and Agriculture Organisation, "The longer-term outlook suggests that there is a moderate risk of a few swarms migrating after mid-June from the spring breeding areas to the summer breeding areas along both sides of the Indo-Pakistan border."

The FAO had raised an alarm over the locust outbreak in northeast Africa and Saudi Arabia in February, saying that heavy rains and cyclones have boosted locust breeding since last October.

It posted an update in early May stating that breeding had intensified in Iran and Saudi Arabia, and occurred on a smaller scale in southwest Pakistan.

Adult locust swarms can fly up to 150 kilometres in a day with the wind and adult insects can consume roughly their own weight in fresh food per day. A very small swarm eats as much in one day as about 35,000 people, posing a devastating threat to crops and food security.