India   All India  24 Jun 2018  Locals married off two frogs in Varanasi to appease God of rain
India, All India

As per organisers, the ceremony was arranged to please Indra, the God of rain, in return for much-needed respite from soaring temperatures. 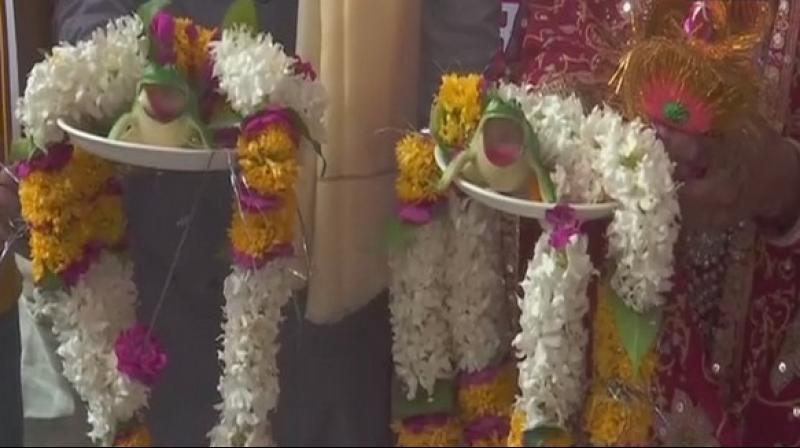 The two plastic frogs were kept on decorated plates with garlands around the 'newlyweds'. (Photo: ANI)

Varanasi: A wedding ceremony of two plastic frogs took place in Varanasi, in the hope of an early monsoon.

As per the organisers, the ceremony was arranged to please Indra, the God of rain, as per Hindu mythology, in return for a much-needed respite from soaring temperatures.

"We want rainfall in the city. It's an old belief that the wedding of frogs makes Indra Dev happy. We have been affected by the blistering heat. It is raining everywhere but not in Varanasi. So, we organised this wedding, requesting Indra Dev to hasten the arrival of monsoon in the city," an organiser told news agency ANI.

The two plastic frogs were kept on decorated plates with garlands around the 'newlyweds'. Two persons dressed themselves up as the bride and bridegroom. A priest was performing a hawan (special offering) to solemnise the frogs' marriage.

A huge number of people who had gathered for this unusual wedding were seen dancing to the beats of a drum and enjoying the rare occasion.

With little or no rainfall seen in parts of Uttar Pradesh, locals are experiencing difficulties due to rising temperatures in the region.

In Lucknow, the district magistrate has ordered authorities to shut all primary and secondary schools, and CBSE and ICSE-affiliated institutions till June 30 due to excessive heat in the city.

Furthermore, strict action would be taken if any school is found operating before the stipulated date, an official release noted.